Now About Those Anatomy Charts... 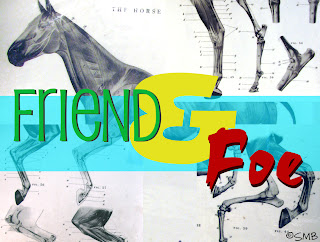 PART I
Now that we've cruised down our own version of the information super-highway together, let's address some curious ironies regarding anatomical illustrations. Irony is the patient partner of the realistic equine sculptor, so it does well to notice its presence.
It's no big news flash that anatomical illustrations are standard-issue studio gear, since we all know that structural faithfulness is the foundation upon which realism is based. Logic even implies that if we sculpt accurately enough according to a good enough diagram, we'll produce a realistic sculpture purely by default.

To tell the truth, figuring out how to "connect the dots" is a terrific learning tool, and a necessary exercise for further understanding. Anatomy really is a form of living mechanics, and so sculpting every little metaphorical bolt and I-beam for a time can be thought of as brass-tacks basics. This approach even can serve us well for a time, and earn us continued success to boot.

But if we're cognizant of our habits, there will come a time when we realize there's far more to realism than matter-of-fact structure. When this happens, we gain access to a whole new depth of perception, and our work finds renewed potential. It's peculiar that a most profound lesson would be gifted to us by a paradox.

As such, it may become increasingly difficult over the years to ignore an intriguing contradiction within equine realism: we assume anatomical diagrams are reliable for creating realistic equine sculpture, but the truth is they fail us right when we need perspicacity most.

Let's explore the reasons why because what's more important than the information they contain is what we do with that information. So let's go...

Irony #1: To sculpt truthful to life, we must let go of anatomical illustrations.

If we're paying attention to the path, we realize that we come to anatomical references as a process. In the beginning, anatomy is an unfathomable wad of perplexing structures, and so we work hard to gain clarity. As we refine this clarity in our intermediate stages, we may adhere to illustrations with dogmatic fervor, faithful to every perceived aspect in meticulous exactitude. As overkill as this may seem, it's a natural stage for learning the rules; we must know how to sculpt tight before we can loosen.

It's in our advanced stage that all our preparation either finds fruition or fizzles out, thanks to our habits. We either learn to sculpt beyond our illustrated security blanket, or we get burrito-ed tightly within it, confined and constrained by the safe, comfortable formula it provides. But if we wish to express anatomy truly, we need to release our tight grip and turn it into a fancy Globetrotter ball-spinning move. Bringing us to...
Irony #2: Don't take anatomical diagrams at face value.

As seductive as they are, they aren't self-evident. This isn't to say they aren't invaluable guides, but they'll deceive us if we don’t recognize them for exactly what they are: interpretations by individuals attempting to make sense of complex biological structure.
If we’ve participated in an equine dissection, it’s obvious immediately that nature is messy, tangled and organic. Structures blend into each other, with networks of fascia and other systems weaving everything together into one symbiotic, almost indecipherable whole. It may come as a surprise then that living anatomy doesn't manifest as the neat, discreet packets, delineations and bundles we find so scrupulously depicted in every anatomical diagram.

As a result, those who attempt to translate this interconnected, dense mass of bone and flesh in an illustration end up imposing their own interpretation of how that should be conveyed. This is one of the reasons why anatomical references are inconsistent with each other, differing in nomenclature, or even which features are identified, described, or organized.
We also should realize that what we see in a chart isn't necessarily what we see in life, or seen exactly that way. Anatomical features also vary between individuals, with different fleshy bits having different degrees of definition, texture, shape or volume, for example, and even bony parts can vary. Fleshy anatomical features even change according to motion or tension, and so we're obliged to factor in the unique moment of our sculpture rather than just transfer an anatomical diagram onto our clay.

In the middle, we have a snippet of the classic "Ellenberger" side view. Now compare that precision to what we see in the examples here - all from stock horses. Note the commonalities, and more importantly note the differences - differences from the chart, and differences between each other. Also note how stance and balance change the muscles. What this means is that we cannot treat each sculpture with the same anatomical formula; use an illustration as a guide.
So peeled back and laid bare, an anatomical diagram really is just someone's opinion. This doesn't mean to disregard them, of course. We construct the best understanding of a problem the more different opinions and ideas we factor into our consideration, and the same applies here. So rather than take any one anatomical resource at face value, it's better to find those references that have an opinion useful for our artistic purposes, and incorporate as many of those useful opinions we can find. And so we come to...

Getting the planes right on a sculpture really is the second step to good realistic work (the first is proportion). In fact, there are many fantastic realistic works that are pretty much nothing but "plane work" (the work of Herbert Haseltine comes to mind). We don't need definition for realism, we need correct planing. For this reason all the anatomical definition in the world cannot compensate for incorrect body planes, yet the same cannot be said of the reverse.

Being so, body planes are as distinctive to each species as the anatomical blue print - because of the anatomical blue print. Planes also change according to posture or motion, and even vary slightly between individuals or breeds. In fact, many anatomical features manifest only as a plane, or play "peek a boo" between a plane and definition depending on the moment. Understand a feature's plane, and you're well on your way to completing a convincing sculpture.

The best way to learn about planes is field study, to run our hands over many equines to get a feel for the "characteristic angles" of our subject, or the characteristic way light and shadow play on the animal. We already do this as sculptors during the "blocking in" process because we know instinctively that planes are an essential element for realism.

However, leaning too much on illustrations distracts us away from what our hands already know, and we start deviating away from reality. This is why those who rely too much on diagrams tend to "flatten" their sculptures, either distorting the accurate planes, or "flattening" the muscles too much.

The blue lines indicate one of the general planes of the hindquarter, as a basic example. An illustration is in 2D whereas the living thing - and our sculptures - are in 3D. So we cannot just carve in the anatomical features lifted from an illustration and expect to produce a believable sculpture.
Next time: PART II

In Part II, we'll consider more of these instructive ironies, plus some important lessons learned. So stay tuned!
"There are no facts, only interpretations." ~ Friedrich Neitzsche

Now About Those Anatomy Charts...

Posted by SARAH MINKIEWICZ-BREUNIG at 12:16 PM