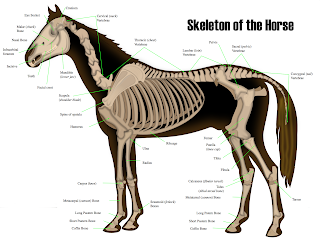 Welcome back to this 17-part series exploring equine structure and mechanics. Months previous, we learned how to use anatomy charts more effectively. We've discussed how anatomy and conformation aren't synonymous. We also discovered the significance of viability and functionality. We also learned how to organize our creative process to best facilitate accuracy. We've also considered the spectrum of believability when it comes to realism,  and the Five Ps, or components that steer us towards more realism. We even learned about some common artistic errors in realistic equine sculpture. That was a lot to chew on, wasn't it?

Well, in this series we'll move beyond this rudimentary understanding and move into an intermediate-level of discussion. For that reason, this Part II will present some common anatomical terminology. Researching equine structure will inevitably present us with funky terms that refer to anatomical locations and orientations. We should be familiarized with such terminology so we can better decipher anatomical texts and visualize how anatomy is put together in our heads and in our sculptures.

Now it should be mentioned that this terminology is often different between texts or resources. We have to remember that each dissection entails a new person trying to make logical sense out of chaotic, organic nature. That means that some terminology might be different, or anatomical structures may be organized in different ways. That's okay. If we have a firm grasp of the structures themselves, then transferring that understanding from text to text and diagram to diagram will be easier and more accurate. Everyone has their own way of doing it, and eventually we'll discover our own.

So to help us understand many of the structures presented in this series, let's discover some directional terminology and anatomical definitions... 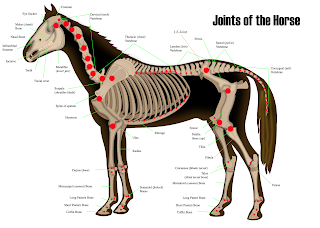 These are common terms we'll encounter in anatomical text so it's a good idea to be familiar with them. They may also be combined to best describe the location or orientation of a structure.

The main reference planes are the:
The main orientation terms are the:

There are terms that describe the different parts of bone. Sometimes these parts, such as protrusions and ridges, are subcutaneous boney landmarks on the surface of the animal. The bony parts are described as:
Some bones, like those of the neck and back have what are called "processes." These serve as important connection points for muscles, tendons, and ligaments and, therefore, are important levers for soft tissues to articulate. There are two different basic types of processes:

When two or more bones join together, they form a joint. Joints are the mechanisms of movement; without them motion would be impossible. As such, joints may be immovable, slightly moveable, or very moveable depending on their structure and fleshy connections. Joints also absorb shock and serve as connectors and linkages. The equine has lots of flexible joints, varying in degrees of motility.

Each joint's location and parameters of motion are unique, and collectively define equine motion. Yet no joint in the equine operates independently, or in other words, all joints involve the movement of other joints or affect another portion of the body. The jaw joint is the only one with the least amount of influence in this way. Therefore, it's important to understand the location and nature of the joints to understand equine biomechanics because they act as a series of symbiotic systems that also work as a symbiotic whole.

There are some basic concepts to understand regarding movement such as...


It's a lot to digest, isn't it? We deal with a lot of horse terms every day, and they're used to describe any number of aspects about our subject. So familiarize yourself with them then, and next time we'll discuss tissues. Then after that, we'll travel back in time to see what makes a horse a horse—and why.

Now one might wonder why we need a discussion about evolution for a discussion about equine anatomy and biomechanics, and the truth is: it's all about context. It's not enough to know how the equine is built and moves, but perhaps even more importantly, we need to know the why. Once we understand that, the natural logic of his body prevents us from exaggerating type or movement to unhealthy degrees we so often see in life or in art so we can portray the subject responsibly and compassionately.

So until next time...tease yourself with terminology!

"Nature puts leaves on trees and they are, none of them, exactly alike; like people, endless variations on a theme. In that sense, nature does the art thing better than we do."

Posted by SARAH MINKIEWICZ-BREUNIG at 10:52 AM