Heads Above The Rest!; Exploring The Science and Art Of The Equine Head for Sculpting: Part 6 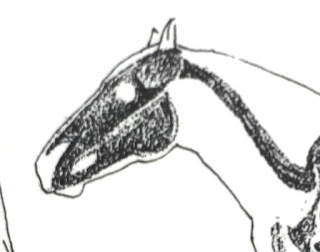 We’re back with this 20–part series scrutinizing the equine head in biological and artistic detail to deepen our understanding of this unique and complicated feature of this singular animal. Knowing the Biologic of the equine head gives us not only more insights as to how to sculpt it, but also a better context from which to base our creative decisions. In this way, our work not only improves in realism, but becomes more responsible in its depiction. A win–win!

In this Part 6 then, we’ll delve into the equine's ears and sense of hearing, features that help to define the his biology. Undeniably, his ears are an essential sense, so without further adieu, prick those ears up!…

Seated behind the zygomatic arches and the back of the mandible, and in front of the occipital crest and on the crown lays the bulla for the ear, one on either side. The flute of the ear moves much like a ball–and–socket joint at its bulb with the bulla. They're usually busy as they express mood and home in on sounds, making them a fun feature to play with in sculpture in terms of narrative.

As for shape, equine ears can be tricky to sculpt due to their delicate and complicated structure—they truly are unique in shape and specifically characteristic of Equus caballus. In particular, note the gracefully shaped flute and the dainty rims and sometimes curved tips (depending on breed or individual variation). Also notice the delicate twist, curvature, and fold at the base of the inner rim in the helix region, and the “V” formed at the base where the two rims meet in the front. Also note how the flute, this “V,” and that twisty fold change as the ear is rotated. Additionally, the medial rim has slightly rounded edges while the lateral rim fans out more with a flatter edge. 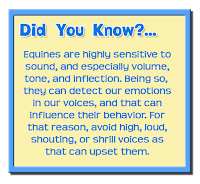 However, most anatomy references skim over them, so we have to really hunt to find clear, reliable information. Nevertheless, we can simplify and separate the equine ear into seven basic components:

The horse uses his pinea to collect and flood sound waves into the inner ear, capturing sounds our flat ears miss. (If we cup our hands and hold them to our ears we’ll discover some of the sounds our flat ears miss.) When a sound occurs, the ears automatically react through a “Preyer Reflex.” This improves his chances for escape because, on the open plain, the only noises present—other than those from the weather, foliage, or the herd—could be a stalking predator. Practically speaking, too, the horse only has to approximate the location of the sound in order to run in the opposite direction.

That said, he exploits two ways to localize sound sources. The first is the time delay the sound signal arrives at each ear, revealing which ear is closest to the source. That is to say it takes slightly longer for a sound to reach one ear than it takes to reach the other ear. So if the source is directly in front of or behind the head, the sound arrives at both ears simultaneously. However, if the source is off to the side, one ear receives the sound waves slightly sooner than the other ear. As for the second way, the head casts a "sound shadow," so one ear hears a sound slightly louder than the other, indicating the direction of that sound. For this reason, animals will a larger spaces between the ears—wider crowns—may have better sound localization abilities, another benefit of a larger head.

Curious though, less distance between the ears can usually cause an animal to detect higher frequencies better. The distance between the ears in horses, as measured from one ear canal to the other, is about 7" (18cm) compared to about 11–12" (28–30cm) in people. Because of this in part, horses have a greater sensitivity to high–frequency sounds, however, equines aren't that good at localizing them. This is why a horse may hear a whistle, but not be so good at discerning where that whistle is coming. However, equines have such sophisticated vision and scent abilities for predator detection, they don't really need to pinpoint the exact location of a sound, only the general direction to run away from it.

Each ear is equipped with about 21 muscles to activate them. In comparison, we only have 3 (all of which are vestigial). Each equine ear can swivel up to 180˚ to quickly target and track sound, giving the horse 360° hearing without the need to move his head. The sound waves then funnel through the external ear canal (also called the “auditory canal”) into the middle ear where they cause the eardrum, a thin membrane, to vibrate. These vibrations are sent through the stapes bones, and finally the sound waves reach the inner ear where they cause vibrations in a snail–shaped structure called the cochlea. Running up and down the cochlea are extremely sensitive hair cells that act as transducers. When these hair follicles bend, they generate electrical signals that stimulate the auditory nerve which are then sent to the brain.

Equine hearing is similar to ours, with binaural hearing, in which the ears detect sound concurrently. Nevertheless, it’s clear that equines have a keener sense of hearing—a recent study indicated that horses can even hear sounds up to 2.73 miles away (4.4km)! Furthermore, while we can hear sounds in about the 20 Hz to 20 kHz range—being most sensitive to the 1 to 3 kHz limit—studies have shown that horse cochlea have 2.5 spiral turns with an audible frequency range of 0.20-22 kHz (6.8 octaves) at 30 dB SPL and 55 Hz-33.5 kHz (9.3 octaves) at 60 dB SPL (Waring, 2003). Even so, horses appear to be most sensitive to sounds in the 1 to 16 kHz range, with the lowest threshold of 7 dB (Waring, 2003). This means that horses can hear higher and lower frequencies than we can, and seem to be better at locating low frequency sound. They’re also especially good at identifying tiny differences in tone and loudness. Recent research has even implied that, like elephants, horses may communicate with frequencies outside of human hearing. Subsequently, horse ears are typical busy between being so expressive, mobile, and capable of hearing sounds we can’t.

Nevertheless, it’s clear that equines filter out sounds deemed non–threatening which seems to be biologically based, but also dependent on the individual. For example, equines will typically respond to the vocalization of other equines. They’re also usually quick to react to rustling sounds, for good reason—it may indicate a stalking predator. That said, however, an equine can also become conditioned to a sound associated with something pleasing such as an owner’s voice, the sound of a treat bag, even the sound of the owner’s car. Like people, too, horses can loose their hearing with age, with the high frequencies being the first to be lost to then gradually down the sound range. Yet since the horse has a broader range of hearing, he can lose some of it without significant problems.

There’s a lot more to the ears than simply fun, flighty flutes on the top of his head, isn’t there? It would be so interesting to hear how an equine does, wouldn’t it? To discover all the sounds we miss would be fascinating! Perhaps a little disconcerting, too, being much more noisy.

Nonetheless, equine ears are no easy thing to sculpt. Their convoluted shape, nuanced details, expressiveness, mobility, location and "seat," and changing nature will always challenge us no matter how experienced we become. In fact, if we're truly doing our job, we'll pay very close attention to them, just as much as sculpting an eye or nostril. Indeed, incorrectly or carelessly done ears can destroy our illusion just as quickly as anything else. Yet too many artists only give the ears a cursory treatment, seeming only to settle for approximating their qualities with oversimplified treatment. Still others don't quite understand them and so create errors in shape, symmetry, movement, details, or placement. For these reasons, we can deduce a great deal about an artist's abilities by inspecting their sculpture's ears. Any misinterpretations or stylizations there will reliably indicate errors elsewhere on the sculpture.

In Part 7 then, we’ll continue our analysis with his brain, his smarts. This is an extraordinarily complicated structure and subject, so we’ll only discuss it in simplified terms, but even a basic understanding is immensely helpful. So until next time…keep your ears open for more insights about the equine head!

“I am mindful to allow for the joy of exploration and discovery within the framework of each of my works.” ~ Tom Francesconi

Heads Above The Rest!; Exploring The Science and Art Of The Equine Head for Sculpting: Part 6

Posted by SARAH MINKIEWICZ-BREUNIG at 2:00 PM