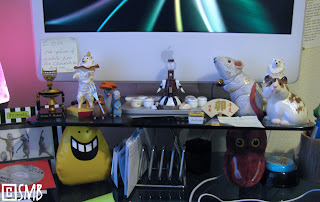 A close-up of the altar of my now-spiffy computer desk.
So much has happened these past three months I don't know where to begin. So much bad, so much good - and a whole lotta pandemonium in between. For brevity's sake, the brilliant news is that hubby got a new, fabulous permanent job! It's the perfect job for him, in every way, and we couldn't be more thrilled. Thanks to Lynn and Barry, who got Ham's resume into the right hands. "(Our) troubles are all over," as Black Beauty would say. Thank you! We can now hunker down and get on with our future, leaving the past of unsettling limbo, frustration and stress behind.

In keeping with our new life, we decided we needed "new" offices, since after ten years, both were in dire need of a thorough scrubbing and overhaul. So taking the lead over Memorial Day Weekend, hubby decided my office was first, it being the most offensive to all he holds good and holy in this world. Indeed, the tangle of electronic wires had become a hopeless neural knot, with dust and random clutter clogging the works. It's also rather shocking what can accumulate and propagate when unwary, so anything unused for three years was shoveled out, being either donated or dumped into the recycling bin. Our home Internet network needed a complete revamp, too, and that was tied into this overhaul as well. 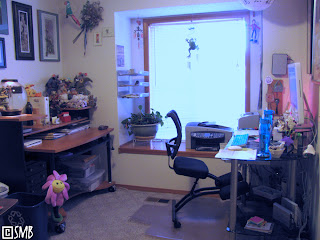 My "new" office after being torn apart, scrubbed clean and reorganized, from the bottom up. Every cable and chachki was cleaned, too. Phew. There would have been "before" pix if not for two things: (1) I was ashamed of what a pit it had become, and (2) hubby instigated the backhoeing so quickly that I didn't have time.


For those who didn't know, those desks were switched originally, with my computer desk on the far wall, on the left. The new switch was made for the redone network cables, and also because it would put me right next to my future ratties (well well WELL). All that new empty wall space will be filled very soon with the plethora of prints and original paintings I've collected these last few years.

Personally speaking, I'm not one to have my spaces (oh heck, my whole house) look like something out of Sunset magazine, as lovely as that might be. The designer look just isn't "us," as we prefer our spaces to be more casual and eclectic - we're more Bohemian than Bauhaus. So our spaces tend to be cobbled together with memorabilia and random bits of furniture, with the only rule being: if we like it, it comes to live with us. Who cares if it doesn't "match?" This rule is particularly amplified in my office (and even more so in my studio, but that's another story)... 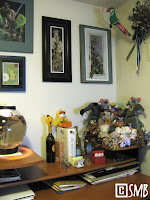 A close-up of the far desk, with Ackbar's fish tank on the left, with one of two altars dedicated to rodentia on the far right. 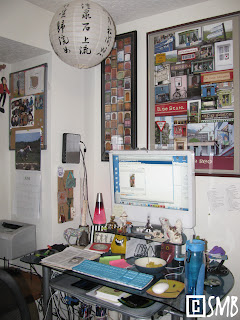 My "new" computer desk. The dusting alone was almost as maddening as the tidying up of all those dang wires! I'm nibblin' on a bowl of pineapple cores, hence the bowl.

A collection of ceramic bas-relief pieces, lit by the glow of the lava lamp (with empty space for future additions). A boatload more are hanging on my other office cork board (which I forgot to snap for the blog) and in my studio. Who knows what new pieces will be added over the next ten years! 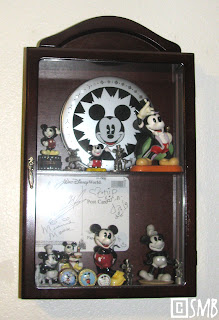 I love classic Mickey, and have a modest collection of the little guy. I mean, really - a world-famous rodent. How could I not be a fan? 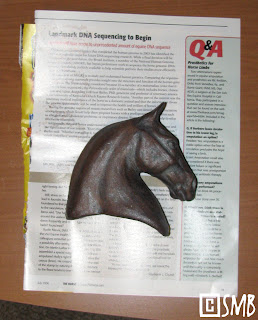 Laurie Jo's daughter, Merryl, made this ceramic horse bust years ago and gave it to me. It makes a great paperweight and I absolutely love it! Girl's got talent! 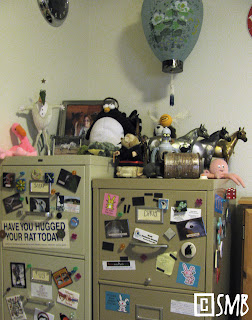 Here are the file cabinets, which you can't see in the full photo. Sometime next month, I plan to go through them and clean them out, too. Oy. Mincing Mockingbird magnets are a common sight in my office.
So there ya go. One day soon, I'll paint my office walls. I'm thinking teal (my favorite color), with big silver glitter Seussian spirals, with the window alcove probably a metallic purple. I also plan to make my own tiles to inlay into the alcove's sitting surface, probably in blues, greens and purples.
Along those lines, we also have tiles for our kitchen floor, but the darn things are starting to crack. So I figure "have kiln, make tile" for that, too! Probably in terra cotta, or glazed porcelain, but only thicker and sturdier than the crappy ones we have now. Thinking of it, I also could make tiles for my kitchen counters and bathroom counters...gadzooks! Ten years later!
Anyway, I was exhausted after it was all done, but it sure does feel good walking into a clean and orderly "new" office space. It'll take some getting used to, but that's half the fun!
"Each morning sees some task begun, each evening sees it close / Something attempted, something done, has earned a night's repose." ~ Henry Wadsworth Longfellow

Posted by SARAH MINKIEWICZ-BREUNIG at 9:28 AM