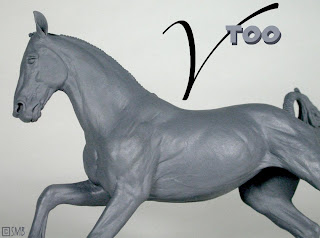 Sneak peek of VToo, sporthorse mare
Another piece I struggled with was -- ironically enough -- a new version of my sculpture Valinor. But what was supposed to be a simple piece of derivative art became a full-blown project that resulted in a sculpture quite different from the original version. As you may already know, it's pretty much impossible for me to do anything the easy way, especially when so much time has elapsed between the original piece and now -- about six years!

And one of the things that I most enjoy about this type of work is that it clearly tells me that I'm still growing and learning -- that I haven't reached a plateau. The idea of artistic stagnation is upsetting to me, so every so often I revisit an older piece to see how my eye and technique has changed. And in this case -- what a difference!

You also may notice the name change. Originally I'd been referring to her as V2, but Hubby gently informed me that this was the name of a Nazi rocket. YOW. Rocket, yes -- Nazi...NO. So with a bit of a tweak, I kept the idea but with a more benign twist. And so her name is now "VToo." She'll be off to Resins by Randy soon to be cast in white resin. To see more pix of her, please visit her album, and to see her side-by-side with her older sister, Valinor, go to this album. She almost makes Valinor look like a pony!

But as I mentioned, this piece was an unexpected struggle. Boiled down, there were two features that were big monkey wrenches: (1) VToo wanted to be bigger. She just did. And I fought her over and over until she beat me into a corner. Yeah -- she won. She gave me a royal smackdown, to be more precise. So I had to lengthen her legs (in two places each: Both forearms, both gaskins and all cannons) by cutting, repinning and resculpting them. That was a lot of tricky work, lemme tell ya.

But then (2) was the bigger problem: I didn't know what to do with her mouth. For those of you who don't know, many showers in the model horse world like to gussy up their pieces in exquisitely handmade, miniaturized tack and props in order to create a performance scene, much like military miniaturists, or railroad and doll house enthusiasts. You can peruse more "performance scenes" on the NAN 2010 site. And here are some splendid examples of the caliber of this tack, here, here, here, and here, and a whole listing of miniature tack makers here.

Anyway, therein lied the problem. I'm not known to create "performance-oriented" pieces, opting instead to wallow in horses simply being horses. But VToo really wanted to venture into this arena more than I'd planned. Now I'm a bit of a stickler for context. Because each moment doesn't exist in a vacuum, neither could VToo. And the specific moment that was the problem was the bit's action in her mouth -- if she were real, in a real moment, the bit would have an effect on her mouth due its presence there, and due to the actions of the rider.

Now most pieces are sculpted with mouths that "don't have bits" in them, so when they're shown tacked up in these performance scenes, especially when a tug or close contact is indicated in the reins, the "bit less" mouth looks odd to me because it has no context. So I was presented with a choice: Sculpt VToo's mouth as if it existed in a "moment vacuum," or sculpt it as if moment was expressed there. If I chose the later, it would mean her mouth would look really odd without a bit there -- and would that be tolerable to me?

So I waffled back and forth about this for days...which turned to weeks, which then turned to years. In the end, she made the decision for me: If she wanted to be more "performance-oriented," so must her context, and so moment must be expressed by her mouth. She simply reined me into submission (har har). In consolation, I figured I could resculpt that area to be "bitless" on a casting for a later new version, or for a ceramic or bronze version. So there ya go. It took some time, but I eventually accepted the bit (har har hearty har har -- said like Bugs Bunny).

But it wasn't a full concession: If you notice, her braids are the more "hunter" type, meaning that she really shouldn't be tearing around and carrying on like she clearly is. But I couldn't resist. That moment of a horse being a horse despite our expectations is far too irresistible to me, and it expressed her inner spunk which I knew she had.

Anyway, a "redo" of an older piece will be another theme in an upcoming mini -- a new version of my Spinnaker, now turned into a mare... 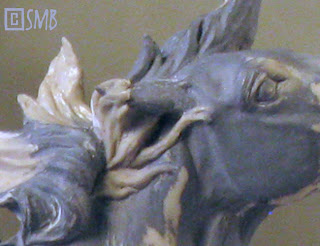 Sneak peek of the new "redo" Spinnaker. After I thought she was done, I primer-sprayed her grey. But then I decided to tweak her more, hence the grey areas with the bare epoxy areas. She just needed more "energy." The piece dictates what it needs, what it wants to be. Not the other way around!

I'd hoped to have her done by today, but I just ran out of time...because...my PMC classes are this weekend! I'm so excited! My mind will be swimming with new ideas for jewelry and trinkets -- can't wait! This will open up a whole new world of creativity for me, another kind of transition in my work, and I'm eager to take the bit in my teeth and run with it!

"Intent is a tool, not an obstacle, to seek spontaneity." ~ Kelly Borsheim

Posted by SARAH MINKIEWICZ-BREUNIG at 5:00 PM 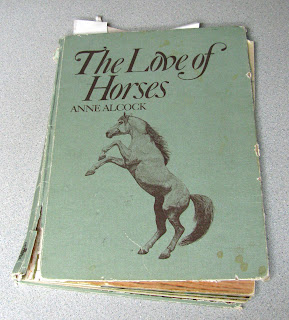 Above is my oldest horse book -- the one from my childhood as early as I can remember. As you can see, it's been well worn and loved. I'd spend hours curled up on my bed, pouring over the photos and studying each one carefully. To this day, I still haven't read the text. This is my favorite horse book, even today. Its musty book aroma projects me back to my childhood bedroom, and I'm a kid again, dreaming the dreams I once had.

This book also was the start of my mania in earnest. It was from this book that inspired countless sketches trying to get things "just right" and to understand equine structure, even at a tender elementary school age. I couldn't care less about my cursive homework -- I wanted to draw and learn about horses! It was my quest. To this day, I still keenly remember being so young, yet analyzing the images to find structure, pattern and logic to all the lumps n' bumps so I could begin to decipher what I was wanting to recreate. I remember looking at anatomy charts and trying to match them up. I remember running my hands over the horses at horse camp, trying to program all that into my head for drawing later that evening.

And boy -- do I remember how completely confused I was. It was a confounding mystery that made absolutely no sense. And because I didn't understand it, I labored to the point of obsession to copy exactly what I was seeing, in the belief that in doing so, I was automatically creating realistic work. Because it had to be real -- it had to look like it could breath and whinny at me. I had to capture a real horse of my own. But when I didn't achieve my goal -- which was all the time, being a perfectionist -- my frustration often drove me nuts. But I kept at it.

I look back now at 42, and I see I did the same thing with sculpting. Now one would think that switching from drawing to sculpting is an easy jump, but it really is trickier than even I expected. Drawing is recreating the illusion of a 3D object on a flat piece of paper, using color to create the illusion. With sculpture -- you create the whole 3D object. There's no cheating. So your brain has to work like a computer scanning laser to memorize all the way around the object, at all angles, in order to have a prayer at duplicating it in clay. And that takes a tremendous amount of time, practice, mistakes, study and working to see the subject constantly from new perspectives, figuratively and literally.

So in my early sculpting career, I obsessed over anatomy charts, painstakingly recreating my sculptures like anatomical illustrations, again in the belief that if I simply duplicated what I saw, I automatically was creating something realistic. And that's true -- to a point. The problem is that anatomy illustrations are made from dead horses, which is why sculptures too married to them often lack the impression of moment and life so important to a convincing realistic sculpture. They look static and flat, as lifeless as the illustration. And that really frustrated me with my early work. While I had grasped the anatomy, I still was falling short of capturing a living, breathing soul.

In recent years, I began to realize that this living quality could only be achieved by loosening up my interpretations -- by using the charts as a guide rather than a corral. I was able to see the mercurial nature of flesh and the momentary distortions and eccentricities it revealed that not only were fun to sculpt, but instilled a sense of individuality, life and moment to my work. So oddly enough -- I've come full circle. I now know the rules, but I know how to break them, to the point where I can create lumps n' bumps in perfect clarity that would have perplexed my childhood self into madness. It's taken about 36 years, but here I am. Odd.

This dovetails into my new work coming out of my studio soon. In particular, a piece named "Alfred," a miniature scale drum horse I've been focused on for the last two weeks. Some pieces just sculpt themselves. Literally. He spontaneously popped into my head and demanded my immediate attention -- and then he just took it from there. I've only been along for the ride. 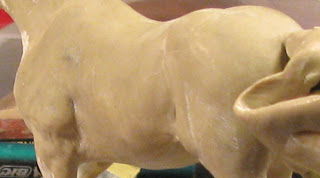 Sneek peak of Alfred, who'll hopefully be finished by the end of the month!
And Elsie taught me so very much and because of her, I've been so surprised at how Alfred has simply materialized before my eyes. He's revealed to me that the child has finally come to understand. But, joyfully, there's still so much more to know!

"There is a road from the eye to the heart that does not go through the intellect." ~ G.K. Chesterton

Posted by SARAH MINKIEWICZ-BREUNIG at 3:28 PM