A Birthday to Remember 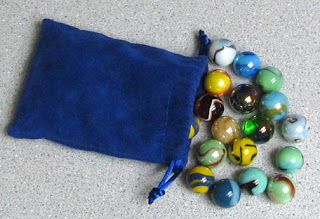 On a whim, I bought some fancy marbles at a local hobby store (I originally went in for some sealing spray). For $8, you could cram as many marbles you hand-picked yourself into this baggie, so voila! Pocket art glass! Happy Birthday to me! I found my marbles! Finally.
When you wake up on your birthday, you probably have bright ideas about how your day will unfold -- a cornucopia of some things you enjoy. Such was my day today -- my birthday -- and I had it all planned. Off to the Farmer's Market in the morning for my week's supply of lettuce and cucumber, then out to breakfast, then Toy Story 3, and then dinner at some place steeped in comfort food...and all day with my Hammy Man. Piece of cake, right?
Well...every now and again, the Universe decides to give you a metaphorical "wet willy" just to make sure you're paying attention. Let me break it down.

It all started quite promising...a beautiful day and down to the Market. Cucumber - check. Lettuce - check. Off to Goldy's for breakfast. An hour and a half wait? Um. No. We have a movie to catch!

Oddly enough, what immediately popped in my head was Big Gay Al chirping, "I'm super! Thanks for asking!"

So thinking it was the battery (which was old and does need to be replaced), we called a company which would send someone to give us a jump or install a new battery on site. A hour and a half? Well, OK. Apparently a lot of people were having this problem. We'll get lunch! So off we go to our favorite Indian restaurant, the Taj Mahal, in downtown Boise. I had my very favorite Indian dish, mutter paneer and Hubby had lamb rogan josh, and with two orders of nan bread...of course! Delish! Can't beat that for a Birthday lunch!

So afterward we walk off lunch by making our way to the Basque district to check out the Jaialdi festivities (Hammy was thinking about the lamb kabobs even right after lunch!). Alas, nothing was stirring in the afternoon heat, since the party really only starts in the evening. But it was a good excuse for a nice walk. So we make our way back to the car to wait for the jump-guy. He shows up and lo -- the jump doesn't work and it's not the battery. It's the starter. Oh. Peachy. My car decided it was all about him today! 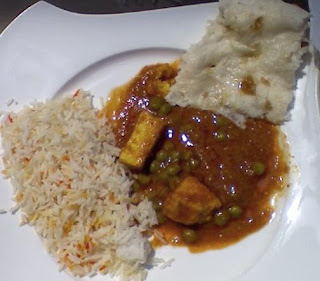 When all else fails -- eat Indian.
That can make anyone happy, even if for a time.
So. Now. The adventure really begins.

Trying to find a towing company that will be able -- or willing -- to get your car out of a tight-fitting parking garage is a lot harder than you might think. It was lookin' bleak. Our last ditch effort would've been to call the police and get their help pushing my car in neutral, and around each hairpin turn (without power steering) and onto the busy downtown street. They probably would've had to stop traffic in all likelihood. 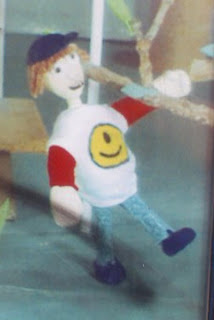 There were lots of little signs during the day to remind me to remain cheerful and happy, despite the on-going implosion of my Birthday into a festering, hot mess. Like this! This was snapped from a poster about the Farmer's Market at the downtown bus station. That cyclops Happy Face T-shirt! LOOK AT THAT! I want a shirt just like that. Now.


But after a chaotic musical chairs with phone numbers and referrals from tow company to tow company -- and Hammy repeating the same story over and over -- three and a half hours later and with his phone battery about to die (because he forgot to charge it the night before), we finally find a tow company that's able to do it...and willing to do it. Apparently they have a special kind of tow truck that allows them to specialize in such tight extractions. Like surgery. Only surgery with big chains and gears and winches...and in close quarters with really tight corners. Upon my concern that we'd take out every parked car on our way out, in a wake of crumpled devastation, our tow guy cheerily quipped, "That's what tow insurance is for!" Oy vey. Holding my breath, we make it out of the garage with nary a hiccup. So nearly four hours later, we finally leave that hot, noisy parking garage and head for our waiting-mechanic. 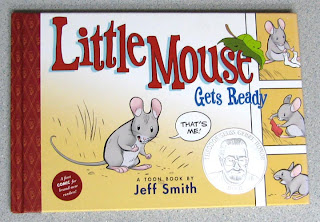 Not all was lost! While walking around downtown, I came upon this irresistible kid's book. It's for kids, I know...but those illustrations! There was no way I was going to leave this one behind! The story is darling, too. Yes...I read it. Happy Birthday to me again!

So we get to our mechanic and get The Green Machine all checked in, and right before the place closed at 5pm -- not to open until Monday. While Hubby was getting everything squared away, I took the opportunity to check out the super-cool ancient RV-Bus that was waiting for servicing: 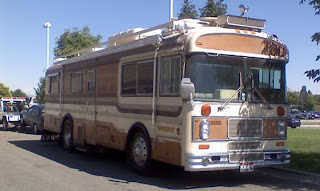 Look at that thang! Is that not the neatest RV you've ever seen? They don't make them like that anymore. Apparently an ancient couple drive it around the North American continent in their retirement. Sweeeeet! And you can see my poor green car right behind it. 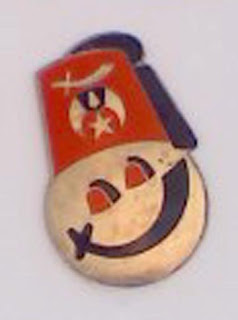 And again -- another sign to stay upbeat. This little smiley face Shriner guy was on that bus! So cute!
On top of all that, we had many firsts today!:
We were both pretty fried by the time we walked in the door at nearly 6pm. Suffice to say, we missed the movie. That's OK -- it'll be there next week anyway. We also decided to skip dinner, but we had our leftovers from lunch. And since I don't believe in Birthday "do-overs," this one will go down as one of the most...interesting...ways to commemorate my birth. Perhaps an odd, but fitting analogy: Life usually has other plans for you, and while they may not be what you envisioned, you'll still get a good story in the end.

And I got my lettuce.

"The only thing that makes life possible is permanent, intolerable uncertainty; not knowing what comes next." ~ Ursula K. LeGuin

A Birthday to Remember

Posted by SARAH MINKIEWICZ-BREUNIG at 5:39 PM

Braids on the Brain

I've been quiet here because my mind has been immersed in sculpting. Whenever that happens, I sink into my own world as my focus shrinks to a fine, intense point. Days go by in a blur and my only measure of time is how far along I get on each stage of sculpting. And when it's going well (as it has been), it goes fast! But this means I'm blissfully happy! When life permits this kind of delirium, I go for it full bore and all my sensibilities relax into a calm, serene joy. This state of mind allows the work to create itself and I become simply a conduit. To me, this is paradise.
To you, it means a lot of new sculptures will be stampeding out of the studio very soon! The first couple of editions will most likely be minis, but I plan to throw in some larger scales for good measure. I really want to finish that Friesian stallion and sproinging Arabian mare this year -- they are big goals. But we'll see. So often in the studio, things simply come in their own time.

And speaking of which -- guess who decided to play nice all of a sudden? Yes -- V.2! The moment I decided she'd be shelved for awhile was the moment everything changed. I suppose it was the removal of pressure or maybe I spoke too soon, but she's nearly done! Here's a sneak peak: 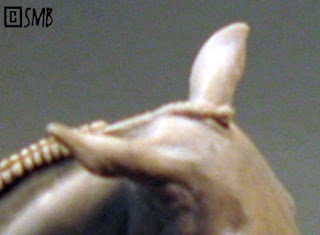 I've redone her braids now four times, and I finally like them. At first, it was a scale issue because if they aren't in scale -- as exactly as you can get it -- the entire illusion is jettisoned. So that was a big issue for me, but I figure those first attempts were practice. It's been a long time since I've sculpted braids! However, what I found especially interesting was my third attempt: I got the scale right, but they still didn't look right. I pondered this for some time, then realized -- they were too perfect. No matter how tidy a braid job is in life, there are always little eccentricities and imperfections that are just as important for realism as scale and precision. So I had to recreate imperfections in my sculpted braids in order for them to look right to my eye. And voila! So now I just have to do some fine-tuning here and there, and then she's off to Resins by Randy for casting.

Elaine Lindelef was a huge help in guiding me with the braids on this piece (Thank you, Elaine!) as was this book, Braiding Manes and Tails, A Visual Guide to 30 Basic Braids. To be able to see how these braids are created was a tremendous help in getting all the little details right on V.2. Because let's face it -- a good braid job is all about attention to detail, whether in life or sculpted.

"Joy is but the sign that creative emotion is fulfilling its purpose." ~ Charles du Bois

Braids on the Brain

Posted by SARAH MINKIEWICZ-BREUNIG at 6:36 PM

Phew! I finished them in the nick of time! I'm sponsoring a Champion and Reserve Champion set of awards for the Breakables show, hosted by Maggie Barkowitz. This show is dedicated to all horse figurines cast in ceramics or cold-cast ceramics, making it a really diverse, exciting and often historic exhibition. Collectors really bring out their rare pieces for this show! 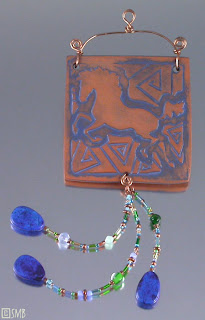 The Champion award. This is one of my new stamp designs in terra cotta clay. I created the hanging contraption out of hammered copper wire -- I love copper. Also note that I punched in a third hole on the bottom, to allow me to affix another copper finding, and beads beads beads! 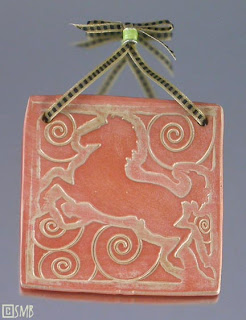 The Reserve Champion award, my previous design stamped in terra cotta clay.
It's really fun to play around with these tiles in different ways -- with clays, glazes, ribbons, beads and different holes (or no holes). There really are so many options! With this in mind, I've decided to create batches of tiles with various hole configurations to allow buyers to gussy them up however they wish. I think it's important that an option exists for people to "customize" their tiles with their own festoonery. In this sense, the tile becomes a kind of giant bead or accent, and I'm looking forward to what people do with them in this regard.

Speaking of which, all the bisque FHF Fundraiser tiles are off to the participating glazers! Mine are finished, and I just have to get them photographed and packaged -- then they'll go up for sale! I'm aiming to start selling them before the 24th, so stay tuned!

"The whole difference between a construction and a creation is exactly this: that a thing constructed can be loved after it is constructed; but a thing created is loved before it exists." ~ G.K. Chesterton

Posted by SARAH MINKIEWICZ-BREUNIG at 1:17 PM