My Last Nerve is a Fighter 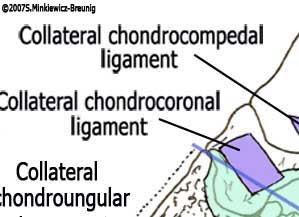 Hello again--but this time from the critical unit of Systemic Software Necrosis! In other words, I'd like to kill my Microsoft Word program. At least bit-slap it silly. So I apologize for not posting earlier, but nearly all my attention has been focused on a current writing project with an ominous deadline--next month! GAH! Every time I look at the calendar, my eyeballs pop out on stalks and my hair looks like something inspired by an experiment on MythBusters. So if I seem a bit hard to get a hold of these next few weeks, it's because this little Shetland is scrambling in the salt mines to get this project published on time.

Published? What published? Well, starting January 1, I became the new editor for the RESS newsletter, The Boat, which is now a biannual ezine published as a full color PDF for members. I'm rather passionate about this organization that has helped so many of my fellow equine artists grow, and I've poured that level of enthusiasm into this new version of the publication. For months I worked on it. 200+ pages. Totally formatted. In Word. I was so puffed up, thinking how efficient and competent I had been by starting so early!

About three months ago, Word decided it simply didn't want to open it anymore. Harumphf! It even had the audacity to decide to crash every time I tried to coax-beg-cajole-shriek at it to please open the file! What gall! Now usually I have "Techno Joy" (in the words of Eddie Izzard) when it comes to writing, word processing and publication lay-out, but this euphoria turned to "Techno Fear" in one heart beat.

After a barrage of trouble-shooting, I was at wit's end. Ultimately, I figured I'd just have to pay a professional to rip it open and salvage what I could. But on a whim, I tried one last ditch effort on my part--my little iPages word processing program that came with my new iMac.

Wham!--there it was! That funny little program ripped it right open, images and all, though all the formatting was lost. Small price, though, since I was ecstatic to have salvaged everything, even in raw form. Now since I thought I didn't have time to learn a new program and play eight months worth of catch-up, I re-started The Boat in Word again, thinking the document had developed a corruption that I would just avoid (somehow) in the future.

I desperately need to develop the skill of slapping myself at strategic moments in life.

Word crashed again!--After six weeks of work of feverishly reconstructing the publication. And with no indication as to the bee in its bonnet! I had it with Word. A program I had depended on for 10+ years was now simply unreliable for this publication, so I promptly bought AppleWorks. I would just have to bite the bullet and learn a brand new program on the fly as I re-did The Boat for a third time, while also wrapping things up to meet the publication deadline. But you know, it's ironic how things pan out to work for the best--here I thought my forced leave from the studio was a disaster, but if it wasn't for that, The Boat would be months late, or perhaps not published at all as a Winter issue! So hooray!--I guess? 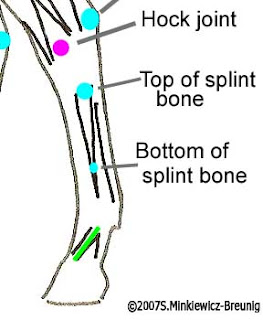 And so far, so good, but keep your fingers and footsies crossed that AppleWorks doesn't develop a neurosis, too

My Last Nerve is a Fighter

Posted by SARAH MINKIEWICZ-BREUNIG at 1:54 PM 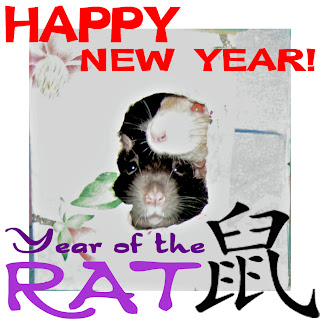 As you can well imagine, I'm frothy and agog that 2008 is the Year of the Rat. I'm pretty well freaking out. I have all my rat gear and I'm so ready to welcome in 2008 with open arms! And, personally, I just can't imagine a better symbol for any year, but in my case (and I suspect for many of you out there, too) a more serendipitously apropos symbol for our life paths these coming months.

Like many of you, hubby and I watched the 100th Year Anniversary Ball come down in New York, and it was beautiful and meaningful. But I can't wait for February, for Chinese New Year, to roll around, then I can really get crazy with celebration! I mean...c'mon...I'm existentially bitter about being a Year of the Monkey person, and fully intend to wallow in Ratiness this year, as I hope you all do, too! May all the blessings of Ratiness pile in through your door in 2008! 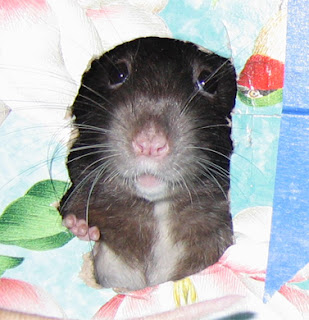 And I'm happy to report that my recovery is going well. My mobility is almost back to normal (though I still have to take it easy and I still not allowed to sit upright) and the numbness and impaired coordination of my legs is almost completely gone! And, just as important, I was able to cook my customary breakfast this morning for the first time in ten days, and Beasley was especially grateful to get back to his morning routine. He's a little scrambled egg junkie. That's him peeking out at you from his Kleenex box hideout. Like cats, rats love to play in boxes, particularly those that have little peep holes and inner hidden compartments and paths inside. He and Bix entertained themselves for about two hours exploring every nook and cranny and playing through the peepholes last night. Beasley was on my shoulder when the New Year's Ball came down, too. He likes to join in on the party!

And it's a beautiful New Year's Day here--white snow on the ground, blue skies, bright yellow sun and crisp winter air! It doesn't get any better for an Idaho winter! I hope the day, and the coming year, is equally beautiful in your neck of the woods, too! I feel ready for 2008. Really. Ready. Eager. Bring in ON!

And so with that: "We must be willing to get rid of the life we've planned, so as to have the life that is waiting for us. The old skin has to be shed before the new one can come." ~Joseph Campbell

Posted by SARAH MINKIEWICZ-BREUNIG at 3:06 PM