I Am In True Love 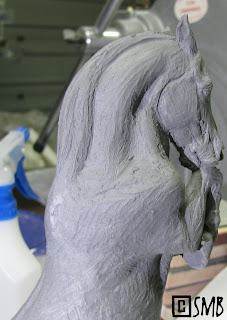 For those of you who know horses, that familiar "upper lipping" horses do adds moment to this piece.
If you've been following my Facebook studio page, you're familiar with a new project I've spontaneously undertaken. And I say "spontaneously" in the purest sense of the word. I've never done anything like this before and took off on a whim, spurred by a moment's inspiration. In this unthinking act, I found true love in the creative process.
But let me backtrack a bit...a couple of years ago, two dear friends conceived of a new show format that was, well, wonderful and revolutionary. I'm a sucker for clever minds conspiring for a happier future, so of course I was in full support! The focus of this event, BOYCC, is the ceramic expression of the equine, an art form right up my alley.
Subsequently, last year I was asked to create pieces for the "swag bag" given to each paid entrant. After much thought, I decided on a special custom hanging tile (which I'll document in coming weeks).

More interestingly, however, I was invited to create a table centerpiece for one of the sit-down meals. This took a lot of cogitation, but either concepts ended up sidelined, or left for other projects. I was starting to sweat, since BOYCC is just over one month away. But the Universe has a way of quietly leading us in the right direction, and boy...did that vast, star-studded expanse hit pay dirt this time!

To set it up for you, I can trace three things that lined up like runway lights to point me in the right direction (funny how the mind and muse work). First, I've been working on goofy little sculptures for a friend over the past month, which I'll unveil in due time. Second is the process of "claybody customizing" in which a slip-cast clay piece is altered while the clay is wet, fresh greenware. And third is the work of Susan Leyland, of which I greatly admire.

So on Tuesday, there I sat in my ceramic studio becoming increasingly irritated with myself for not having a workable idea, let alone inspiration, for the centerpiece. Cue big sigh and eye roll...add self-loathing. Then my eyes slipped over to the bucket of leftover earthenware clay from tile pressing...and kerPOW! It hit me. Like my creative life flashing before me. Not only was the idea fully formed in my head, but all the possibilities it introduced flooded my sensibilities.

And when I say my "creative life flashing before me," I mean it literally. Not to be melodramatic (OK, so I am here, but what the heck), it was as though some part of my aesthetic died instantly and another was reborn in its place. I sit here now utterly flabbergasted at this new vision teeming inside my mind. Why had this not occurred to me before? Perhaps I didn't feel ready. Maybe I was a little to cautious. Probably I was too creatively narrow-minded. And it could be that all things come in their own time, even art.

And believe me when I tell you it's time because what has erupted before my eyes, seemingly without effort, has been this quirky pony, a one-of-a-kind original in earthenware clay. He's going to be a vase, with a "tube" of clay beside him to hold flowers, lollipops, pens, or what-have-you.

Here he is, roughed out. Ceramic clay is so accommodating, it took me only two and a half hours to get to this point. And trust me when I tell you those hours felt like minutes.
The feel of the wet, pure clay and how it flows and reacts to my fingers is nothing short of pure love. There truly is no other sculpting medium like it. I've used just about all kinds of clay - epoxy, waxy clay, metal clay, oil clay, baked clay, polymer clay and paper clay - and nothing compares to this. It's magical. How could something so simple, essentially just dirt and water, be so exquisitely perfect for sculpting? This wondrous stuff and my heart are singing in unison as my fingers shape this earthy delight. 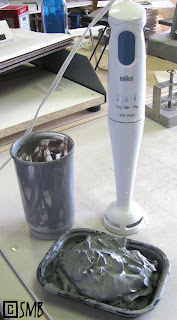 One thing that's needed by the bucketful is thick, pasty slip to glue all the pieces of the growing sculpture together. But you have to use slip made from the very same clay you're sculpting in; otherwise the whole thing could bust apart in the fire. The solution? Store all your clay shavings and leftover bits in a way that keeps them damp. Then take a handy hand mixer, add water and whip up your own dollops of suitably compatible slip! If you let this dry more, you also later end up with clumps of usable clay for sculpting, or slab rolling.
What also has been particularly enjoyable is the sharp departure this pony represents to my usual work, not only in approach but in concept. Here we have a realistically sculpted pony, but doing something rather, well, unlikely at best - sitting truly upright and "lipping" his knees. This blend of whimsy and realism has ignited a creative atomic bomb in my head, and now my mind is bursting with all sorts of fun or stylized ideas to express through this new modus operandi. Hey, I've been creating realism for over twenty years, so why not venture into new aspects of applying it? This media uniquely allows me to do just that because it responds to the creative moment far better than any other sculpting media I've used. It's easy, fun, quick, cooperative and organic.

So the ease with which this little guy has materialized has been eerie. I've only had to refer to reference photos once (for the hind legs), but overall this piece has almost entirely been created from memory. My hands are simply following what the clay asks me to do. How is this possible? Am I not sculpting him? Or is he? Is the clay? Something else? 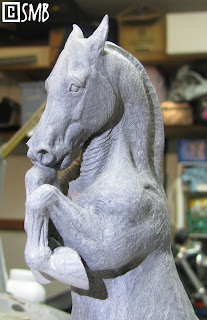 Another view of this fellow a little further along in the sculpting process. This clay is responsive in a way no other media is, allowing even the subtlest flicks of the tool or finger to capture a feature in perfect intensity. Yet at the same time, building up bulk and shaping the big ideas couldn't be easier! When I'm satisfied completely with the "tooling" process, I'll use a soft paint brush and water to smooth the surface.
Thanks to this pugnacious fellow, I've found a new way to create work, and I'm completely obsessed with making more. The thought of creating originals, quickly and fluidly, is exciting beyond belief! So over the next few blog posts, I'll walk you through the rest of his creation because I'm definitely learning as I go.
Ultimately, though, it's not up to me. The pony has to survive Big Al (my kiln). Will he come through the bisque fire in pristine condition, or will he explode into a pile of spectacular bits? The Universe will decide. Such is the nature of clay.
But you can bet that I'll be elbow deep in ceramic clay, creating one-of-a-kind originals either for auction, or sale in my Etsy store. No realistic finishes either. Only art glaze or oxides to accentuate the sculpture and the media. This is my new path. A million thank yous, Universe!
"Art got its start
as a thumbprint
in the mud."
~ Bob Brendle

I Am In True Love

Posted by SARAH MINKIEWICZ-BREUNIG at 6:59 PM