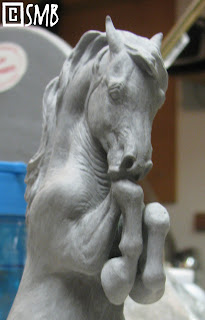 Now that I've processed those revelations thus far, I had another challenge regarding details: veins and moles. These two features aren't all that easy to sculpt, in any medium.

Anatomically, their design makes them a real challenge to translate because they're complex and fleshy. Veins also are bilaterally symmetrical and the major ones follow prescribed anatomical patterns, meaning that I can't just slap them on any which way. Veins also are dependent on the specific situation of the "moment," and even are influenced by the breed depicted as some breeds have "thinner" skin than others.

On the other side of the coin, veins and moles have artistic concerns. They're a study of balance, of achieving a delicate harmony between subtlety and emphasis. Scale also plays a big role because gigantism in these features will surely sink Mr. Pony as surely as putting elephant ears on him!

So early in the sculpting process, I wondered how to achieve these features in clay because I tend to add them later, rather than sculpt them as I go. But the problem with clay is that complications arise when applying delicate bits after the fact, which I won't go into because it's rather technical...let's just say it's tricky.
As an experimental workaround, I decided to carve a series of grooves where I wanted the veins to go, to give more surface area and a "seat" for the new clay. 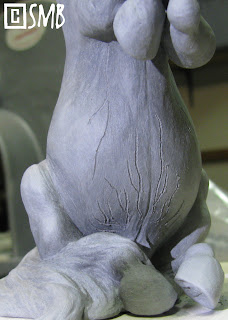 Here you can see what I mean by the grooves. 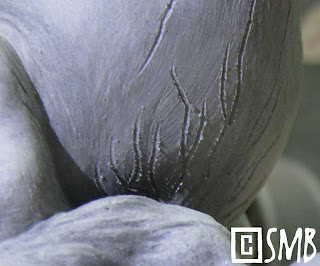 Here's a close-up.
I dampened those areas with a wet brush, waited a minute, and then dotted slip along the grooves with a fine flat brush, just to get the clay mass onto the body. I let those areas dry a bit, and then sprayed them with a light mist of water from a spray bottle to infuse a degree of "give" and "life."

I then used a sculpting tool to define and clean them up, also fiddling with them to blend them into the body. After letting them dry a bit to "rest," I gently smoothed them with my brush to set them "back" into the skin - and voilà! 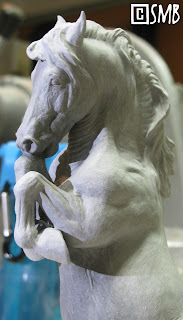 Finished veins and moles.
I'm really happy with how they turned out! The veins have a good degree of fleshiness and a nice balance in intensity. As you can see, the moles are more suggested, which I think works better for clay. If they crack as they dry, I'll just repair them with more slip. The biggie is firing -- I hope all this doesn't pop off! Hey, it can happen. But I'm hoping the "seating" will help them cling on, like anemones to a rock. So tomorrow - to connect him to his vase tube!

"The world becomes fresh and hopeful and new, when we create." ~ Lynda Lehmann
NEWS FLASH: BOYCC has some registration openings, so if you've been thinking about going, now is your opportunity! Don't miss it! Free workshops and seminars, catered meals, lots of swag and goodies to win, gobs of gorgeous "shiny ponies" and great times with great people! For more information, go to the BOYCC website.

Posted by SARAH MINKIEWICZ-BREUNIG at 11:13 PM