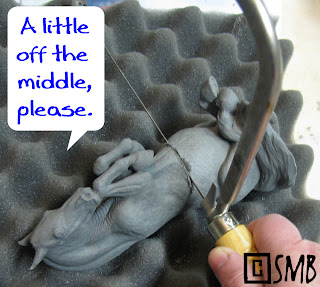 Sculpted solid, this guy has to be hollowed out. The only way to do that with him is to cut him in half and scoop out his innards. His position is a bit creepy, I admit, as though he's tucked his forelegs to make room for the blade! Yikes!
Ceramics isn't all about free-spirited creativity, it's about chemistry, too. Everything from the molecular composition of this stuff to how the whole glob behaves during the fire plays an important role in the design and execution of each piece.
In particular, the escape of air and water molecules from the claybody during the fire often lies at the forefront of many ceramists' priorities. At such high "cooking" temperatures, escaping air and moisture can increase the pressure within the rigid claybody, causing the piece to explode in the kiln. And the more vitreous the clay, the greater the danger.
This is why it's so important to make sure air bubbles aren't present within the clay and that the piece is completely dry, right to the core, before firing. To further mediate these concerns, hand-built pieces like this also need to be slowly fired, to give all the clay components time to gently acclimate to their physical changes. Working in mud incorporates so many variables, that always erring on the side of caution wrestles back a fair amount of predictability.
What does all this mean for Mr. Pony? It means that because I sculpted him solid, he has to be hollowed out, like a chocolate Easter bunny. If I left him solid, it would take months for him to truly dry right to his core, but even then all that inner mass presents a threat of explosion nonetheless. It's just safer to hollow him out, to ensure complete drying and to minimize the possibility of air bubbles busting him into pieces.
The other option would have been to build him around wadded newspaper or similar filler material that would burn out during the fire. However, there are new problems introduced by that method, which really aren't compatible with my way of working. But most of all, I don't want the smoke produced from the burn out to migrate into the house since my kiln is in the garage.

Anyway...onward...I waited until he was rather harder than ideal, so I had to use a hacksaw instead of a wire to cut him in half, but it was easy work regardless (much to my relief). 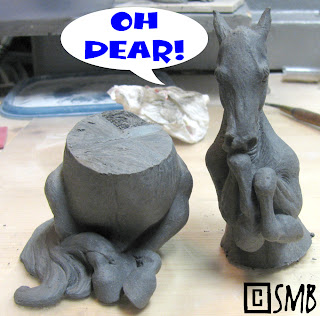 Here you can see what a chunk he was! What I like about working solid is that it allows me complete freedom to manhandle the piece, and shape the body exactly as I want to, without worrying about breaking through or distorting a hollow body.
Then using a dull knife and scooping tool, I proceeded to hollow this guy out in about 45 minutes. To be honest, it was enjoyable. There's something satisfying about the process, of sculpting the inside as well as the outside. 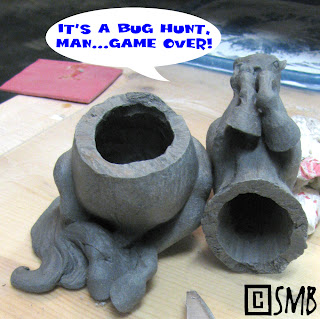 Mr. Pony "husked out," with a hole on his underside for the escape of hot air. I got the momentary yen to turn him into a whistle, but I'll leave that for another piece.
Hollowing also reduces weight, which will be important for future pieces that are supported by legs. What I think I'll do in the future for those designs is to create a hollowed torso ahead of time, then add the head, neck and legs later, with a pillar on the belly for support. We'll see how that goes!

The joining edges of both sides need to be scored with a tool, dampened with water and then have lots of slip applied. This provides both the "tooth" and the "glue" to piece him back together. Then I squish the two halves back together, and fill the gaps with slip. I carved a little heart into the inside surface of his body, just for kicks. I think I'll do that on all these hand-built pieces.

Here he is, rejoined together and hollow. He also sports his roughed-out mane.
Once I get his mane done, all his little details finished and him completely smoothed out, I can attach the "tube"...

A kitchen gadget doubles as a tube-maker! I wedged some of the scraps and ran the blob through "Derby," my slab roller. When the piece is drier, I can shape it and clean it up. I may even do a bit of decorative carving if I feel inclined.
I'm having such a great time creating this guy! I hope to have him finished by tomorrow, so he can just sit and dry for about three weeks while to move onto other waiting projects. I'll fire him first to see if he survives, and if he does I'm going to start another! If he doesn't, I will have learned what not to do for the next piece.
"You can count how many seeds are in the apple, but not how many apples are in the seed." ~ Ken Kesey

Posted by SARAH MINKIEWICZ-BREUNIG at 10:59 AM