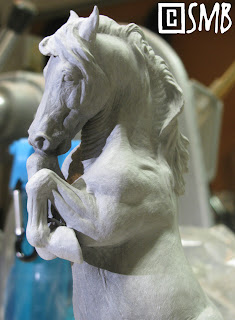 The BOYCC centerpiece pony is almost done!
I'm in the home stretch! Many sculptors know this as the "fiddly bits," the stage where attention must be paid to little details, final adjustments and loose ends. So close! And I'm happy to report that earth clay accepts and holds detail just as good as epoxy, and better than oil clay.
Also at this point is the smoothing process. When I work in epoxy or oil clay, I use a solvent with a soft, artificial brush to smooth out the surface, softening the tooled features and creating a nice burnished surface. For epoxy I use rubbing alcohol and for oil clay I use Goo Gone. Yet despite the seeming ease this implies, smoothing can be quite tedious with oil clay and epoxy. Indeed, it can take hours, even days in the case of epoxy, which also may require sanding once the material has cured.
On the other hand, such drudgery doesn't exist with earth clay! This stuff takes to it so well, in fact, that this otherwise dreaded step becomes a delight. Even better, I get to use just plain ol' wholesome water instead of smelly chemicals. Better still - no sanding or using the Dremel tool. To add the cherry on top, being able to go back and tweak even days after a session is a novel concept for someone seasoned in  self-hardening epoxy clay. Without a doubt, for me, there just isn't any better sculpting medium than this glorious goop - humble mud.
Nonetheless, I still was concerned how it would respond to smoothing. Tiny details are important on a large piece such as this and, more importantly, this clay is full of grog. So would these details melt away? Would the brush scour them off even with a light touch? Would the grog hose it all up?
The good news is: "no," "no," and "no." The clay took to smoothing just fine, and in fact far better than oil clay and almost as good as epoxy. This is a revelation. But looking at him now, I admit...I rather liked the tool marks. I miss them. Another revelation. And sure, groggy bits are here and there, but I like them. They speak to the media and the process. More revelation.
I deduced that the clay took to smoothing so well because, like epoxy, it's capable of being "melted" in place to set the details back "into" the surface.  In contrast, oil clay responds to this method by simply getting more gooey and messy, and so its detailed edges have to be softened around, like icing around the sides of a cake. All this means that the fiddly steps go much slower with oil clay. For example, it can take me a few hours to smooth an oil clay plaque, like Reflective, but only about 30 minutes to smooth Mr. Pony.
I also discovered two more bonuses unique to earth clay. First is the ease of sculpting manes and tails. This may not seem like a big deal, but trust me - it is to me. I've long struggled with hair and still consider it the hardest feature to sculpt. That may seem counter-intuitive, but believe me when I tell you that it's outrageously complicated.
This is because the flow of hair is both passive and random, dependent entirely on the physics of the "moment" between the horse's moving body and the physical reality that a horse lives in, to include centrifugal force, wind, objects, knots, etc. Moreover, not only does hair have texture, but it's comprised of individual strands that combine into layers and clumps that all work together to create elaborate effects within the flow. In short, hair is chaos in motion. So any interpretive hiccup that contradicts all this will compromise the illusion, as seen in many nice realistic sculptures weakened by an ineffective translation of hair. I know - I created many of them in my early work!
Adding even more to this complex brew, the flow of the mane and tail is an important design feature for the composition of any piece. Honestly, they can make or break a sculpture. So beyond all the physical concerns, convoluted artistic considerations exist, too. What all this means is that I can't just slap on a mane and tail any which way I feel like because they first require context and composition.
Predictably then, I've stumbled clumsily through many hair variations from the "soft serve," rope-look (or "big hair," which in hindsight I cringe, "What was I thinking?"), to the  drippy-look, to the sheet-look, and to anything in between. Only recently have I been achieving something closer to my goals, notably seen with Elsie. 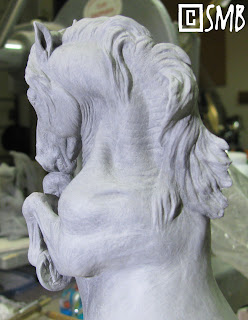 Clay is the only media that allows me to achieve the hair effects I've wanted all along...effortlessly!
Yet with Mr. Pony, I realize now that the problem wasn't me - it was the media! Both oil clay and epoxy lend themselves to the rope-look because of how they behave under the pressure of a sculpting tool. But earth clay is entirely different in that it doesn't "rope-out" under tool pressure and, fortuitously, it breaks. I say this because the unpredictable bits that bust off create the random look of hair far better and easier. In a sense, it's the clay that sculpts the mane and tail with my hand being only a compositional guide. Yet another revelation, and one I'll take back to epoxy and oil clay.
Second has been the palmar foot, or the underside of the horse's hoof that has the frog, sole, bars and toe callus. Despite appearances, this feature also is difficult to capture in epoxy and oil clay because of its natural texture, effects of abrasion and soil clinging to it. The problem is that both epoxy and oil clay want to be smooth under the sculpting tool and solvent, in direct contrast to some of the features of the palmar foot, which means I have to sculpt texture back into this area. 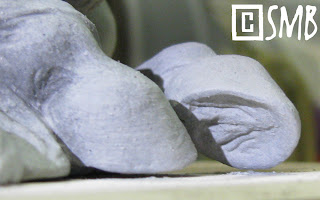 The palmar foot, rendered far better in clay!
Yet with earth clay, the opposite is true. So if I let the clay harden a bit, I simply use a blade-like sculpting tool to carve out the palmar foot, letting bits break off as needed and bingo - realistic textures where they need to be, automatically. Also produced is the realistic look of abrasion, exfoliation and soil, important details that are difficult to recreate in epoxy or oil clay. Another revelation.

A studio revelation: If I'm going to make a habit out of this art form, I definitely need a new ceramic sculpting set up! Those preciously stacked tiles and the need to contort my posture to accommodate the clamp light have gotta go. I'm shopping for sculpting pedestals this week and toying with better lighting arrangements.
All said, however, I'm happy to report that Mr. Pony isn't done teaching me yet. More on that tomorrow, so stay tuned! Same muddy time, same muddy channel!
"Achievements of life are momentary, but realizations are longer lasting."
~  Avtarjeet Dhanjal

Posted by SARAH MINKIEWICZ-BREUNIG at 8:21 PM