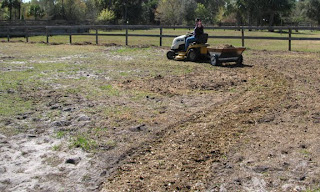 I am the Mistress of Manure. I RULE. Hubby would phrase it another way, perhaps...but I STILL RULE.
Now to play catch-up! In the early part of March, I was able to visit Ed Gonzales in Florida, with Laurie Jo Jensen, for a fun-filled weekend. We hadn't seen Ed in gosh...years...and it felt so good to get together again! He lives on a lovely plot of land with three fun doggies, five gorgeous Arabians, and a tempting studio. We immediately went out to see the ponies and my goodness...I felt like I was in the movie Rainman. "Shiny...very shiny." Those horses glowed! Wow! It was like opening up a living book of "Nitter Pitter." What I like about Ed's horses is that they are exceptionally pretty, yes -- but they were using horses. Solid build and solid minds. So they were all lovely in temperament, and one in particular, Sue, was exactly like Dug from UP. "I just met you and I love you" pretty much defines her outlook on life. 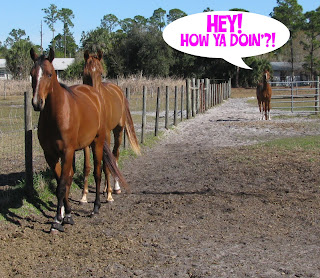 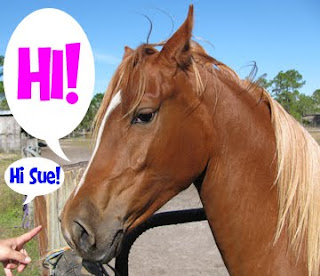 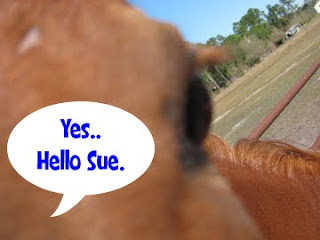 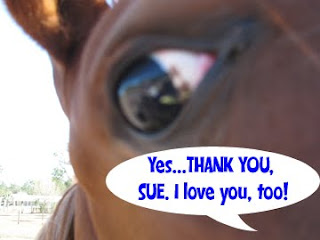 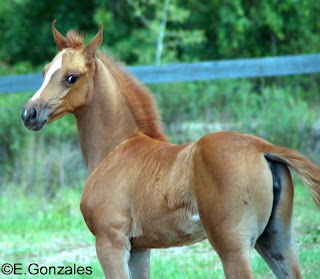 I mean, seriously....this is a baby pic of Sue. If you think this isn't going to be turned into a sculpture pronto, you are sorely mistaken my friend. LOOK AT THAT. 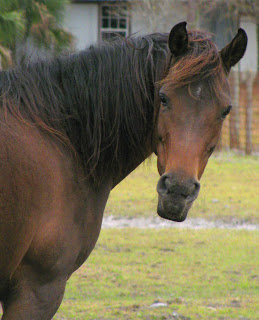 My favorite shot of CC. 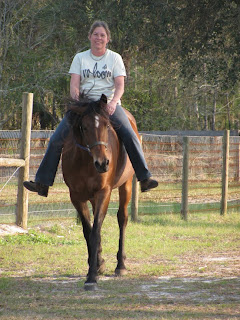 Laurie riding Sharky, my favorite shot of them together. We both liked her -- she was very "go-y," very forward-moving... the mare that is.

We got to help Ed muck out the stalls and do some of the daily horsey chores. While this sounds like a drag to other folks, to horse people, it definitely isn't. And hey, I got an award in horse camp for having the cleanest stall, so I'm a stall muckin' maven. (Which is something my Mom lamented all those years ago -- "She can't keep her room clean, but she can keep a stall spotless!" It's all about priorities.) And doing chores with friends is all the more fun! And I gotta give Ed credit for bravery for allowing me to drive the manure spreader every morning. That was pretty fun! I got to be a pro in no time.

But what was really interesting was the demonstration of Bowen massage his friend gave us when she came over on Sunday. She did it both to the horses and on us, and I gotta say -- wow. I'd never heard of it before and to me "massage" translates in to "pain." I hate massages. But golly -- this was completely different! It's based on a more intuitive paradigm, and so uses a completely different method rather than maniacally kneading muscles. Instead, it's based on the idea of "challenging" and "releasing" muscle groups and so uses a very gentle approach (read: no "ouch"). And boy...does it work! When she did her work, I instantly felt my muscles "remember" to release and my body went limp, one stage at a time. Total relaxation. SOLD!


Ed was a super host and boy -- can he cook! As per request, he made his famous nachos Saturday night, which we scarfed down in due unlady-like fashion, paired with margaritas, which we gulped in Muppet-like fashion (now that's an image, huh?). Then on Sunday night, he made an astounding prime rib that was rubbed down with some magic concoction then roasted encrusted with kosher salt. Now while that sounds really awful, it sure created a humdinger of a super hunk o' meat! I called my Hubby to describe it to him, and I think I heard whimpering. 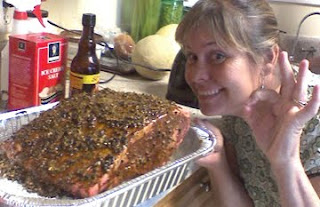 The rub, and Laurie gives the "A-OK." 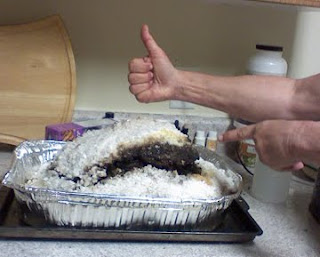 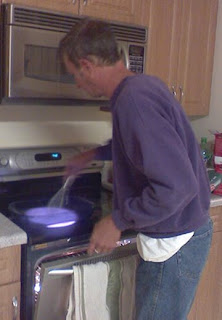 The Master Chef at work at Chez Gonzales!

Then on Sunday night he cooked up an unbelievable crab feast. YES. I porked out on so much crab, I almost felt my eyes morphing into eye stalks and my hands into claws. Sooooo tasty! 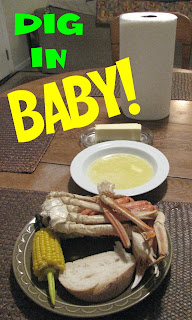 OK, now I downloaded my pix from the trip and -- to my surprise -- I found these. Those two must've snatched my camera while I was doing something else because I didn't take 'em! (You turkeys! I can hear you both snickering!) And so with some added dialogue...cuz I wasn't going to let them go to waste... 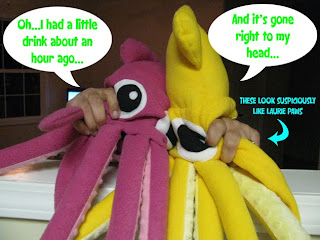 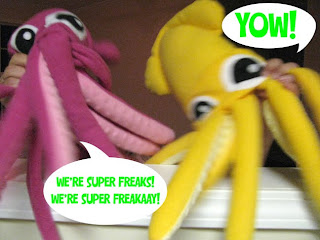 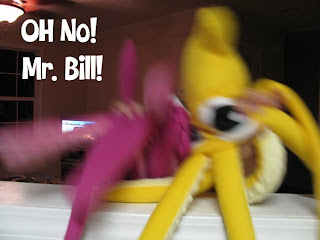 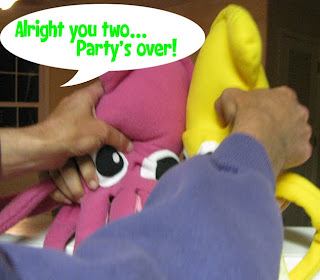 That little snippet pretty much sums up our weekend! 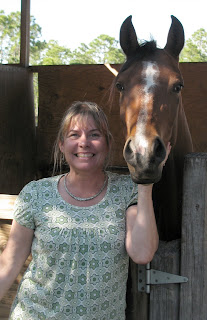 I liked this pic of Laurie and Sizzle.
We had a great time just hanging out, bouncin' around town and playing with the horses. I took a ton of terrific reference photos, too, which I plan to implement on the new Arabian sculptures (and sundry others) in the sculpting queue. It's rather maddening -- so often in the past I had awesome reference photo opportunities, but not taken! Argh. So darn it...I was going to take them now.

But poor Ed -- perhaps he forgot what Laurie and I are like together. We're like a two-part explosive -- mixed together we go KER-POW! So I'm sure we completely wore him out. Hey, I wore myself out! 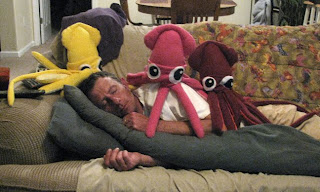 Ed avec Cephalopod.
Laurie and I have this "tradition" of festooning Ed whilst he slumbers. He continues to make the mistake of falling asleep before we do, so he's been garnished with rubber lobsters, firefight hats, various monkey items, and such over the years, all of which we photo document. He's like a decorator crab. 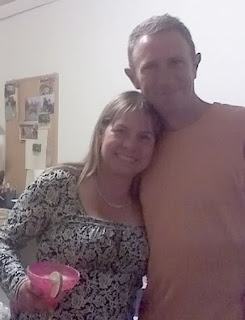 I love this pic of them both. That's being printed out and hung in the studio!
Thank you tons, Ed! I had an awesome time and it was so fantastic to see you again! Give your critters a kiss for me!
"A Friend may well be reckoned the masterpiece of Nature." ~ Ralph Waldo Emerson

Posted by SARAH MINKIEWICZ-BREUNIG at 4:04 PM