Singed but Singing for Joy 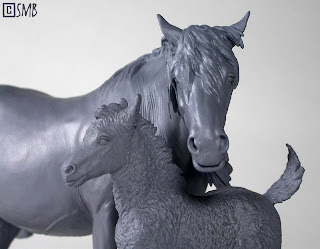 I feel like I've run a creative triathlon, completing this pair and metaphorically collapsing at the finish line and gasping for air. I swear -- I seriously thought I'd never finish them. Considering that I first started them in 2008 (Oliver in July 2008 and Elsie in August 2008), my life has been defined by these two for some time. The long days melted into each other as self-doubt alternately snuffed out and rekindled my determination. Blorg. So these two weren't only a test of my skills, but of my character, too. And I'm happy to say I survived the gauntlet bloodied, but unbowed.

Some have asked why my ordeal with these munchkins became a kind of gruesome self-punishment when they surely were good enough long ago. Well, we're all our own worst critics and my problem is that "good enough" really isn't good enough. It was imperative I reach my goals with these pieces because that compels me to push myself. If I'm not evolving creatively, I'm not growing as an artist and so, to me, the primary goal of each piece is to grow and explore.

Now that said, I'm not sure of your expectations with this pair after all this time. But I was struck by the phenotypic diversity in the breed when I was amassing reference materials. Some individuals were so different, you'd think you were looking at Half-Arabs or pygmy Belgians! But I chose to focus on the semi-feral Haffie type, which you can see reflected in the mare, most obviously. And remember -- she's a 12-14 year old broodmare. And any Mom will tell you that pregnancy changes the body -- and lots of pregnancies really change the body. And I think that's cool, which is why I think broodmares are gorgeous, especially the older they get, just as I think Moms become more beautiful as they age. Moms are like fine wine.

So in a nutshell, this set was designed to speak not only to true horse lovers, but to Moms, too. Mares don't care how they look -- disheveled and ungroomed, they're inherently beautiful. And in many ways, I think this kind of au naturel motherhood makes them even more beautiful because we see the pure, unadulterated equine beauty come out. Similarly, we women have so much annoying baggage piled on us by society to look a certain way, even if we become mothers. I say -- remember the mare! Beauty is beauty. So be comfortable in your own skin, even if your hair is a mess. You're already beautiful just as you are. So my hat's off to Moms everywhere!

But enough yappin' -- here are the pix of Elsie, Oliver and together as a set. 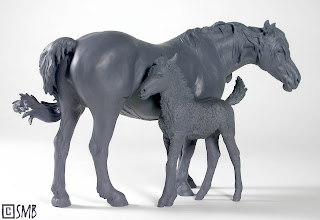 "I am often helplessly confronted by the picture... filled with suspense. What I have drawn suddenly seems to have developed its own dynamic - one that is not always necessarily kind to me. It is a genuine struggle and challenge." ~ Simone Bingemer

Singed but Singing for Joy

Posted by SARAH MINKIEWICZ-BREUNIG at 5:02 PM