Anatomy and Conformation, Part I: Overview 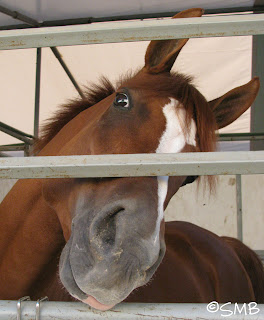 "If you hand me that carrot, I'll tell you a super duper secret."
INTRODUCTION

Taking Mr. Peabody's WABAC Machine to 2011 in the beginner post of Reference Listings, I mentioned that conformation tidbits weren't included in the recommended reference listings "for too many reasons to go into," and would therefore be relegated to a future blog post. Well…four years later, we're finally here. It may have taken awhile—thanks to all the detours—but we eventually got to it!

Equine art is a convoluted genre, perhaps one of the most difficult to master. Nothing about portraying the equine is obvious; this is an animal of opposites, dualities, contradictions, and of carefully balanced biological extremes. Indeed, if we study master works from past to present day, it's clear the equine has challenged even the best. Yet this animal presents one peculiar dichotomy sublime enough to warrant a dedicated series.

What is it? Well…ta da!…it's the topics of anatomy and conformation, and how they relate to our clay. Either topic is quite a buzzword to be sure, particularly in realism. It's hard to avoid them for long because both are integral to the art form.

This may be why trepidation seems to follow in their wake. The dense layers of complexities they introduce into our process are enough to make anyone's head spin. Both are chock–full of fascinating quirks that make an already complex process even more complicated, too.

But the truth is both are more easily grasped if we adopt an idea that clarifies them distinctly. Armed with this new understanding, interpreting and translating either anatomy or conformation into our clay is made easier, more confident, and open to many more creative choices. Think of it as a super–duper secret to "equinecessity" success!

But wait…you don't know about this super–duper secret? Well, by golly…that's no fun! Okay then, let's explore it in a four–part series. Sounds good? Great! Let's go!

Anatomy and conformation are at the top of our to–do list every time we start a new realistic equine sculpture, both being integral components to our narrative. Yet it seems that confusion surrounds each one thanks to the cacophony of differing opinions attached to them and their effects. Books have been written, seminars given, classes taught, art created, and titles awarded thanks to them, but it's curious just how much befuddlement exists regarding either one. It seems counter–intuitive, doesn't it? How could these two topics be so important, yet still generate so much misunderstanding? It doesn't need to happen.

Because there's definitely a way to interpret anatomy and conformation that makes both crystal clear, and as such, their particulars can be applied with greater ease and precision. And once they're thus clear to us, sculpting altogether becomes a much simpler and decisive endeavor. Sounds great, huh? So where do we begin? Well, let's start with the big super–duper secret itself:

Conformation and anatomy are not synonymous, but two entirely different issues that must be evaluated separately, whether in the living animal or our clay.

Sounds like a crazy idea at first and being so, meets with resistance largely because it challenges one of the most pervasive misconceptions anywhere equines are involved: the belief that anatomy and conformation are essentially the same thing, that they're interchangeable or linked. But this mix up can cause us to go off course just as quickly as any flawed technique by confusing the issues of function and structure altogether.

The idea that they're interchangeable can be expressed by the mash up: conformation + anatomy = conformatomy. This view of equine structure is so ubiquitous, in fact, that we'll encounter it in nearly every avenue horses are involved. And a powerful influence it is, deluding us into believing equine structure and mechanics are so simple while at the same time, deafening us to more useful concepts that could take our understanding to the next level. Because of this, conformatomy is responsible for many of our mistakes, and often is the reason why effective troubleshooting can be so elusive. When we lack a clear understanding of either, it's only to be expected we'd get stuck, uncertain of how to fix the fix we've gotten ourselves into. Think about it: if we mistake an anatomical error for a conformational one, an effective solution won't be so forthcoming.

But let's not be too hard on ourselves—it’s understandable why the confusion of conformatomy happens. Conformation lingo is often integrated into anatomical language in many equine resources. Even a dictionary or thesaurus interprets them synonymously. Most professional horsepeople also interchange anatomy and conformation as matter of course. Indeed, we may hear a horseperson claim a champion halter horse won the class because of the animal's superior "anatomy." Likewise, judges don't often make the distinction between anatomy and conformation either, and why should they? There's no distinction needed because that's not what they judge, is it?

Of course, right? For the horse judge, anatomy is already a given quotient in the viable, living animal presented before them; anatomy is already intrinsic to the living animal by definition and by default. So no judge ever will have to determine if the external radial tuberosity is correctly placed, if the biceps femoris is structured and sculpted properly for an equine, if the hock joint is consistent to Equus caballus, if the cranial–atlanto joint is flexing according to skeletal limitations of Equus, or if the great subcutaneous vein is running accurately between the muscle bundles of the forearm.

In short, no judge evaluating real horses will ever have to first determine if they're  inspecting actual horses—the animals already are actual horses. So the issue of anatomy is simply redundant and ends up being folded into the conformation equation. It's also why judges and horse people only judge conformation and take anatomy for granted…and that makes all the difference in the world. 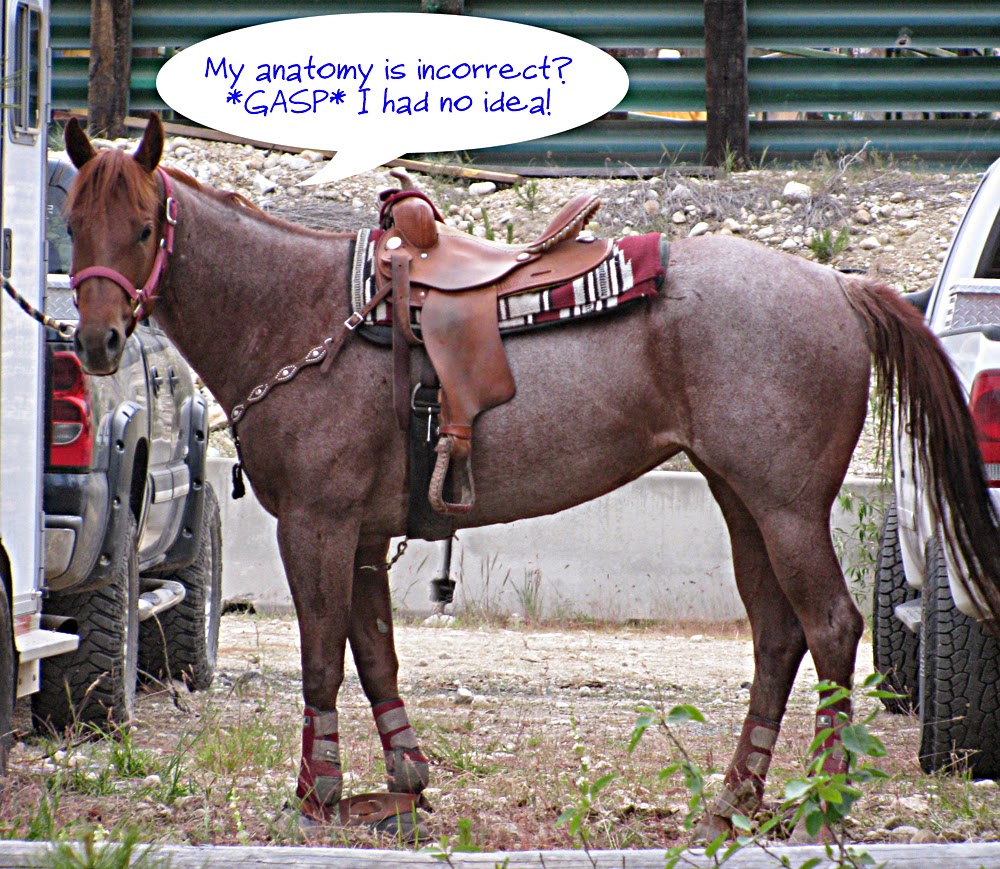 Because we can't, can we? Nope! We face an entirely different proposition in which nothing can be taken for granted only because nothing about this animal already exists for us. We have to accurately recreate both equine anatomy and conformation from scratch since nature doesn't do our job for us.

Being so, nature obligates equine realism to a specific, nonnegotiable prioritization, an equinecessity checklist of sorts. Because if realism is actually the goal, then the most fundamental component of our sculpture must first be anatomy. Of course, it would have to be, wouldn't it? It's simply not possible for us to create a realistic equine sculpture if our clay isn't first faithful to anatomy, right? That's like saying we could create a chocolate bar without chocolate…it just doesn't make sense. It would cease to be what it was supposed to be by simply missing that defining ingredient.

This is precisely why a sculpture with accurate equine anatomy is still a representative of realistic equine sculpture even if it possesses conformation flaws. Why? Well because such equines actually exist in life! They exist all over the place. Indeed, halter classes are designed specifically to rank them, breeders make pairing decisions based on respective conformation points, and buyers make their choice depending on an animal's structural integrity. It's why books, classes, videos, and charts on conformation exist in the first place—to help us identify the good or bad points of real, living horses.

To get right to the point then, conformation flaws are realistic because they happen in life, too. And given the anatomy is correct in such a sculpture, it gets a "pass" in the realism category. It's curious that accurate anatomy can qualify conformation with biological fact.

Now let's flip the equation. Let's create a sculpture with textbook–perfect conformation right down to pitch–perfect breed type. We'll just fudge the anatomy though, because—hey—it's conformation that's the important thing when judging real horses, right? So if we want to judge our sculptures like how a real horse would be judged in the ring, we have to weight conformation first.

So we have a sculpture "built to a T," but riddled with anatomical flaws. And now we have a problem—a problem with reality itself. That's because such specimens just don't exist in real life. What horse walks around with perfect conformation, but with the zygomatics of a cow, the carpals of a camel, and the tarsals of a dog? The sculpture also appears to be missing splint bones and has an extra bicep. And what horse trots around a ring with a broken pelvis and a neck tucking between the 2nd and 3rd cervical vertebrae (the animal would be dead)?

Sure, the sculpture may be unmistakable as its intended breed and possess conformation straight out of the champion ring, but its anatomical flaws are flaws of reality, the logical antithesis of equine realism. Indeed, in life, some of these errors indicate catastrophic injury while some parts aren't even equine. That is to say, the sculpture isn't even of a horse! It's some strange mythological chimeric creature.

In short, this sculpture is neither realistic nor equine. So how could this be a credible depiction of realistic equine sculpture? No matter how perfect the conformation or breed type, neither can logically compensate for anatomical flaws in equine realism.

So even the art form itself proves that anatomy and conformation are two separate issues. Just because the horseworld makes no such distinction doesn't mean this dichotomy doesn't exist—it only means the horseworld doesn't have to make one. But we sure do. Our sculptures earn their kudos based on very different criteria.

And this is where artists trip: they apply the wrong set of criteria to their clay. So to better grasp the anatomy of our subject while juggling the passel of conformation points constantly orbiting, we need to understand their true nature. Being able to distinguish between them clarifies our process, and allows us to troubleshoot with greater precision.

In Part II then, we'll explore anatomy then in Part III we'll discuss conformation. In Part IV, we'll touch on some notions worth considering in relation to all this. For continued research, recommended resources are provided. Above all, this series isn't meant to demean, disparage, or belittle, but to open new paths of discovery to help us create work more aligned to our goals, whatever they may be. So until next time, build up an appetite for some serious brain food!

"Searching is half the fun: Life is much more manageable when thought of as a scavenger hunt as opposed to a surprise party." ~ Jimmy Buffett

Next time: PART II - What Is Anatomy?

Anatomy and Conformation, Part I: Overview

Posted by SARAH MINKIEWICZ-BREUNIG at 9:18 AM