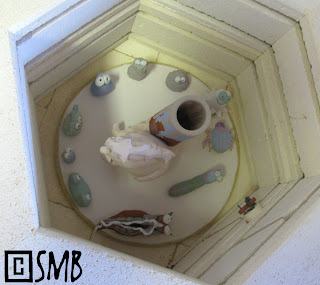 Mr. Pony and buddies in Maury - before I rethought that firing.
Now that this guy has made it through the bisque fire, he has one more fiery gauntlet to run: the glaze fire. This usually isn't such a big deal because it's run at a temperature well below the bisque fire, Cone 06. In other words, anything that would have exploded already would have.
But one can't be too cautious. I'd initially put Mr. Pony and a gaggle of clay critters into Maury, my small kiln (as you can see above). In case you're wondering, "Maury" is short for Moravia, a location in central slavic Europe thought by archeologists to be the first place where ceramics were created purely for aesthetic reasons.
Anyway, unlike my big kiln, Big Al, who has a digital programming pad, Maury is manual only and so he doesn't have the "slow" fire program that Big Al has. So when I turned on Maury, I realized that Mr. Pony was bisque fired on the "slow" setting in Big Al. Would anything other than that scenario cause him to explode, even in a glaze fire? Maybe. Regardless, I couldn't take the chance at this point. BOYCC is next week! (Btw: plane tickets are really cheap right now, so if you're thinking about going - DO.)
So I turned off Maury and loaded everyone into Big Al instead, along with all the BOYCC swag bag and award tiles. At this point it was 4am Friday morning. I set the program to "slow fire" and turned on Big Al...and hoped for the best.
Glaze fires are very different from bisque fires. Remember that glaze really is glass and glass needs time to cool, otherwise it'll crack, or shatter. This is why art glass works need to be annealed. Complicating matters, glass glazed onto ceramics needs to cool around a rigid bisque body, like a glove on a hand. Any disruption will result in cracking, shattering or crazing (not to be confused with crackle glazes).
Thus the general rule of thumb for the cool-down period is to triple the firing time of a glaze fire, to allow the glass time to cool evenly in tandem with the bisque. So, in a sense, we anneal even a ceramic glazed piece, using our kiln as the mechanism. This means that since Big Al's slow 06 fire took 11 hours, that means the cooling time would be 33 hours. So if I fired him up at 4am Friday morning, I can't open him up until Sunday, about noon.
To say that this wait time is excruciating is an understatement, particularly since ceramics always - always - has a surprise waiting in store for you. This media dances to its own drum and at times it may invite you along to sashay, but more times than not, it's a mosh pit. Only those hardcore enough can rock...in making pretty rocks, practically speaking.
So getting back to Mr. Pony...he needed glaze. I'd debated about leaving the pony bisque with an oxide accent, but I figured with him being a functional piece (especially since he might be used as a vase -- read: water), the durability of an impermeable glaze was the ticket.
I finally settled on an underglaze "directional" airbrush treatment in vibrant colors. What I mean by "directional" is that the airbrush is held at an extreme angle to the piece, usually from underneath the features, so that shading is placed on the underside of the anatomical bulges and protrusions. Then clear glaze would be applied on top. This tends to flatter a realistic piece most. The tube would then have a drippy art glaze treatment.
But I had to get him all done in one firing - there was no time for multiple firings for this guy. Luckily, my strategy allowed me to get him all done in one fell swoop! 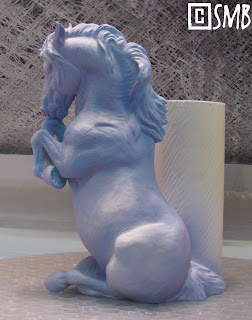 Here's Mr. Pony with his blues and purples applied, with directional airbrush shading. The underglaze is pure pigment, and it's extremely fragile, being a kind of powdered dust. If I touched it, or even sneezed on it, it would be ruined. So once the pigment is laid down, I can't touch it. Lucky for me, his tube provided a perfect "handle." 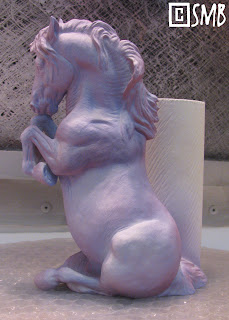 Now for the reddish purples and greens. 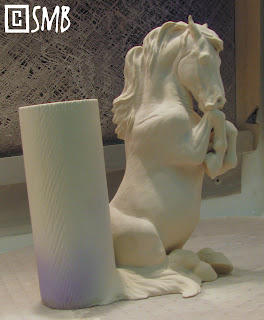 Once he was underglazed, I airbrushed on his clear glaze, which is why he's all pinkish-white here. 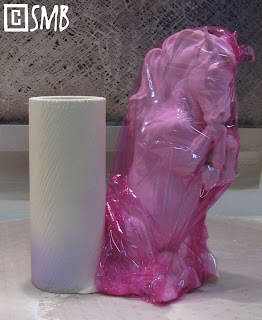 Now for the tube. I Saran-wrapped Mr. Pony to avoid any art glaze from splattering onto him. 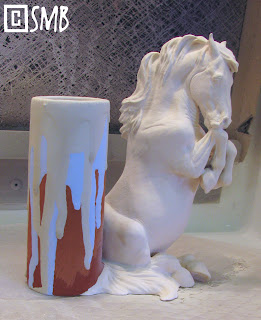 Here you can see the drippy effect. I used four glazes here. On the bottom is Copper Adventurine, a blasted finicky glaze that I have yet to get work well, but I figured what the heck - it's a tube. Above that is Blue Grotto, a new glaze that I have no clue how it's going to look. Again, what the heck. Above that is Cornflower Blue only because I wanted to use it up. On top of that is Sea Spray, one of my very favorite glazes (the tube's inside is glazed with clear and Sea Spray dripping down into it). However, glaze does its own thing...and kilns do their own thing.
Despite any ideas of how I think this will all turn out, the reality is I have no clue. It is what it is - that's it. It all could come out completely different than what I envision - and probably will. Hence the excruciating wait. With fingers and toes crossed. Hoping.
But patience isn't one of my virtues. Not by a long shot.
"patience, n. A minor form of despair, disguised as a virtue." ~ Ambrose Bierce, The Devil's Dictionary

Posted by SARAH MINKIEWICZ-BREUNIG at 11:19 PM