Now for some BIG things... 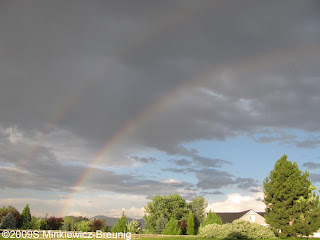 I'm playing catch-up...again. My life feels like a mad scramble up a speeding escalator these past couple of weeks. I'm chin-deep in the Summer 09 issue of The Boat (we have three proofers on this issue - it's that big!) and getting back to work in the studio (more on that in a bit).
Anyhoo....check out that double rainbow (above), seen from my parent's back yard a couple of weeks ago. It was impressive. Clear as day and complete, from end to end. Perfect. Oh, to have a wide angle lens! Doh. One often forgets the scale of a rainbow, and I think including some mortal debris in the shot helps to convey it. 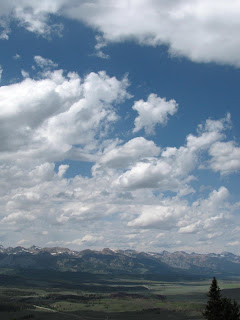 Speaking of feeling one's mortality -- we took a day trip on the motorcycles with my cousin, Greg, (who also rides a Harley) up to Galena Summit. If there's anything that can make me feel part of a bigger picture, it's a vast landscape. Galena Summit (where this shot was taken) is about 8,450 feet in elevation and in the background there are some of the Sawtooth Mountains. It's truly impossible to impart the sense of distance and scale when it comes to things like this -- it's just something that has to be experienced. Oh, to be a bird and simply jump off a hill side and swoop around! If you'd like to peruse more shots, please visit my album here. By the way -- if you're "into" big puffy clouds like I am, you'll like quite a few of my pics! 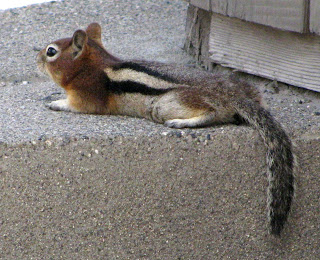 There's a couple more shots of this bitty Blobby in the album, too. I went nuts with all the little squirrel-blobs running amok at the visitor stop on the summit. And when he goo-ed out like that...well, you can imagine. Well well WELL.
Anyway...the studio. YES. I'm back to work! Finally -- something has lifted and I'm feeling myself again. It's odd. If I don't have dozens of different projects going at once, I get bored. Yet if one of them "stops" me -- I get stopped on nearly all of them. It's like one of the millions of hamsters in my head gets stuck in a habit-trail tube and creates a big back-up. A ham jam. I think the Haffie mare was the jammed ham. Hey, it had to happen -- I had to learn and she was the teacher. But learning and art come in their own time. They cannot be rushed or forced. I guess my "sub-routines" finally worked out the problem cuz her sculpting is done! Yes -- DONE! Well...."done" for now. I'm going to put her away for a week or two and come back to her with fresh eyes. If she's still "done" then, then she's officially done done. And yes -- she left her big lesson for the last, but I'll talk about that later when she's truly done. The thing is -- now that she's taught me what I needed to know....

I'm now earnestly working on the mini-stock horse! I couldn't have attempted this piece without first completing the Haffie mare. I had to learn from her before I could tackle this fellow. And I have to admit that I was a bit trepidatious about him. You really have to know your stuff to sculpt a convincing stock horse. Their muscle quality requires a kind of knowledge and nuance about musculature that isn't for the timid or unknowing! It's very distinctive. It's also very easy to get carried away with their muscling and you end up with some kinda weird "Marvel Comic" version of a horse. Then again, it's very easy to go the other direction and create a kind of puffy-blob of a horse, with muscle more akin to Drafter bulk than bone fide "stockyness." It's also tempting to focus too much on muscle delineation, and you end up with something that looks like a skinned dissection illustration rather than a depiction of "living flesh." So riding all those tight-ropes is definitely tricky, and challenging! But thanks to Ms. Haffie -- I'm hummin' along on him splendidly! What I expected would be a hair-puller has been easy and second-nature. I guess my sub-routines experienced a necessary upgrade thanks to the mare. So all anxiety about him as been replaced with excitement and obsession. He's also grown, which is what I expected anyway. My sculpts tend to grow as I work -- once the length of the shoulders (which is here I start sculpting), back and hip are fixed, then it comes together. But until that time, the size of the piece is in flux. So here are some sneek peeks of the Haffie mare (again) and of the (very much in progress) mini-stock stallion: 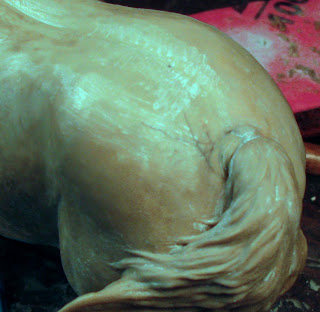 stocky sneek peek
Speaking of obsession...this new PJ Harvey album, A Man A Woman Walked By. OK -- granted -- her music definitely requires a "taste." It's certainly not for everyone (Hubby refers to it as "freaky harpie music"). But, to me, if any "rock" musician can be considered a true artist -- she's it. I'm bonko over her work and have all her albums. Well, I got this new one on a loop as I work on The Boat while I wait for the epoxy to set up on the stock horse (so I can refine it more). But I hear those songs in my head when it's not playing! Ack! You can listen to "Dark Hearted Love" off the new album here.

Anyway...where was I?....oh yeah...The Boat. Working on this e-zine is a blessing. Being so right-brained in the studio, I need a balance with some left-brain work, which this puppy provides. It also helps me to "fill in the gaps" between epoxy-time and paint-time to keep me busy. It's a new kind of challenge, too -- between gradually learning the bells n' whistles of this fabulous program InDesign®, learning new spins on design concepts (from cereal boxes!), writing articles and relating with the wonderful authors....well....it's been awesome. If I could somehow make a living doing this and my art -- I think that would be perfect. One of my big passions is sharing knowledge -- I cannot contain what I've learned. It has to burst out. Even better -- The Boat attracts fellow artists (columnists and article contributors) who have that same yen. So working on this e-zine fulfills my soul as well as my left-brain needs. Anyway -- in a few weeks, I'll post some teasers of the issues here, so you get an idea of what I'm so gaga about.

"The cyclone ends. The sun returns; the lofty coconut trees lift up their plumes again; man does likewise. The great anguish is over; joy has returned; the sea smiles like a child." ~ Paul Gauguin

Now for some BIG things...

Posted by SARAH MINKIEWICZ-BREUNIG at 12:43 PM