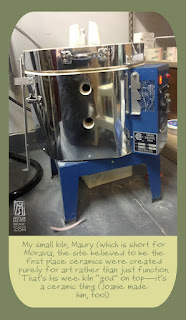 An after–effect bene of artist retreats (like Mudhenge) is a hot hinder. I'm not talking about something found in a centerfold, mind you. I'm talking about a barbecued bootay. A pyrotechnic posterior. Seared seatbones. Glowing hot glutes. In other words—a fire under one's patootie. Specifically in my case, it's the gumption to finish a long–standing piece that's been weighing on my mind for two and a half years…

Yeah. That one. For all this time (I'm ashamed to say), he's been sitting on the shelf half–done and glaring at me with zombie–like eyes. It wasn't because I couldn't glaze him, though, it was because I'd forgotten how I'd glazed him.

Half the game with underglazing is memorizing how many layers of what pigment you put where and how because they work very much like watercolors in that they intensify, darken and change with each successive layer. So if you forget the unique sequential process on a piece—because, oh…say…you got distracted after having finished one side and then completely forgot about it for weeks afterward—there's a very good chance one side will end up looking disturbingly unlike the other.

Compounding my predicament, I had used blues, purples and greens in his colors as an experiment rather than the good ol' trusted mixes, so I had nothing to fall back on. As if that wasn't enough, I'd also employed some experimental techniques that I couldn't quite remember how I'd done. I'm also still rather new to the whole underglazing game, having been pulled in the opposite direction by art glaze all this time, and so I still have a rather paltry mental library from which to pull predictions for informed decisions.

It was a pickle. A big one. Extra warty. Not a place to be in ceramics. I had this lingering image of being a rather juicy worm impaled on the end of a rather gruesome hook, dangled over the open maw of Big Al sporting rather alarming teeth. So there sat that clinky Taboo for over two years while I hemmed and hawed whether to ever finish him, full of trepidation and self doubt. He may be only three inches tall, but to me he seemed like an unscalable wall 1,000 feet high.

But the thing about carousin' with talented, inspiring friends is that they stoke those internal fires of fearlessness and gift you with a kind of moxie. You get braver. "Cheeky" becomes your middle name. Then all of a sudden a set of mighty impressive kahunas sprout out of nowhere and you think, as TV's Frank bellows on MST, "I'M THE GOD! I'M THE GOD!"

So as I nursed the bereavement of my muddy buddies after they'd left, I turned to that clinky Taboo and squinted. You. YOU. It's GO–TIME buster! LOOK at my kahunas! BEHOLD. They may be as fictional as yours, but they're still WAAAAAAY bigger! And so with MST's First Spaceship on Venus blaring on my iPhone, and with my new iPad in tow for reference photos, I blindly careened back into that clinky Taboo with freakish abandon, utterly (albeit absurdly) confident that I could pull off this long–shot. 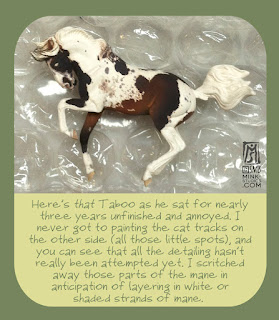 Despite all the factors working against me, however, I knew the one thing in my favor was my palette. In a moment of uncharacteristic foresight, I'd airbrushed some of his basic colors onto it to preserve them for handpainting later. That pigment time capsule not only provided a baseline, but actually nudged memories back to the fore, allowing me to reasonably reconstruct what I'd previously done. I could even input some new handpainting techniques I'd adopted since nearly three years had passed in the interim. So after a couple of loops of "Venus," with a loop or two of MST's Sidehackers for good measure, that clinky Taboo was ready for his final glaze fire in Maury, my small kiln.

Push kiln to "on" and wait.

The good thing about having no idea what you're doing is that you have no real expectations. Anything good resulting from a creative melange has the potential to become a euphoric triumph while subsequent hiccups often fail to pop that celebratory balloon. So as I pulled that clinky Taboo from his glaze fire, I was tickled beyond belief. It worked! Sweet Sons of Sasquatch! It worked! My delirium–induced kahunas pulled me through like a boss!

Upon closer inspection—after the frothy intoxication of jubilation wore off—I saw that his pinking had vanished. Utterly. Gone. I guess I didn't blast it on thick enough, and so my inexperience was showing again (pardon me!). But rather than getting deflated, resigning myself to partial success (which to a perfectionist like me actually translates into shrieking, mind–crushing failure), I got pissed. Really pissed. OH NO YOU DINNIT. After all that fretting for all that time, and all that effort to complete this piece, I wasn't going to be trumped by anything like my own incompetence.

And so back to Mudhenge again. Had I been corralled with just underglazes, this piece would have been stuck that way—pinkless, hapless and hopeless. But because (cue in the chorus of angelic trumpets) Karen G. had demonstrated handpainting techniques for overglaze, and since both she and Lynn provided us with some basic materials to get started, I now had options. Now I'd originally planned to use all this to fix an old Spinnaker I'd screwed up at a previous Mudhenge back in '06, but instead that clinky Taboo got shoved to the front of the queue, front and center. Simple, right?

Surprisingly, yes. Welcomingly, yes. Ecstatically, yes! To my astonishment, a total newb pinking mistake led me straight to this newly discovered soul mate of glazing media. Handpainting these overglazes came as natural to me as scarfing down chocolate glazed donuts, and on top of that…it was fun! And I didn't even have to think about any of it—I just did it. Was I channeling Great Gran?

So of course things escalated beyond simply fixing his pinking, having found that I could achieve a level of nuance and detail I couldn't yet with underglazes. Moreover, I could also adjust the tones of the spots, punch up the mapping, detail his hoofies, and even add layers of color to his mane and tail. And I could do all this in a non–threatening way since what you don't like you can simply wipe away and start again!

What's more, discovering the blissful marriage between underglaze and overglaze has been a joy so far—and there's still so much more to learn! For starters, underglaze imparts a luminosity and glow, and is ideal for even gradient tones and blocking in areas of color with ease when airbrushed. In turn, overglaze lends complexity and depth along with the ability to recreate effects easily that are otherwise quite difficult to mimic in underglaze. Overglaze also provides the opportunity to fix boo–boos after the final glaze fire (which tend to happen more often than they should here). Seamlessly, one compliments the other in gorgeous, unique ways, and it's going to be so exciting to stumble upon them as I delve into this blessed union!

Integrating overglaze also offers a creative familiarity plus the capacity to finish my ceramic pieces in a way that's friendly with my obsessively fixated nature (hey, I'm attracted to realism for a reason!). Indeed, I've cold–painted my sculptures for over twenty years, and to my delight I found that many of my familiar techniques are adaptable to overglaze. I'm also not so handy with the airbrush, being more dependent on handpainting, so this medium fits nicely into my existing skill set.

But perhaps more pivotal, I'm a painter who prefers a high degree of control in what I want to achieve (insanely so it could be argued). It's that whole OCD thing. I become stressed and hesitant when I feel too much control is relinquished to the media, especially when so much time and energy has already been invested in getting a piece to that point. So by combining underglaze and overglaze, I literally get to have my proverbial cake and eat it, too. This is something I can really grow into and make my own.


Even more, my method is fraught with madness. I'm a very chaotic artist who fares best—and creates best—when able to metaphorically go back and forth, up and down, in and out, and even sideways when creating a piece. It's very difficult for me to think linearly, to think in terms of fixed procedural steps to accomplish a finished piece. Yet this is what underglazing is all about—starting at Point A and then following a specific sequence to Point Z. Many of the fixed nonnegotiable steps have been a big trip circuit for me because I create so much "in the moment" that I literally cannot see the road ahead of me—so I end up stuck in a lot of dead ends. But with the application of overglaze I now have the ability to teleport my creativity anywhere I want it to go; I can glaze as messily as I create! 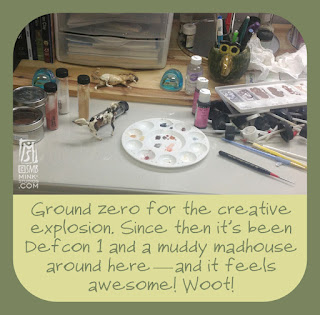 So now I'm eyeballing all the molds, bisques and partially finished projects gathering dust here with fiery new eyes, lit from within by fires set ablaze from the glorious sparks of underglaze and overglaze. Mudhenge 2012 squirted a whole bunch of proverbial lighter fluid onto my creative embers, and I can barely contain the inferno! Put it all together and it means this is a turning point in my career. A game–changer. All the pieces of my puzzle have now been found and fitted together. I have the means to realize my goals now. No more hesitation, self doubt, or unease. What an amazing feeling! THANK YOU Joanie, Lesli, Lynn and Karen! I hope someday to return your favors in kind!

And to think—all this got jumpstarted by a newb blunder! It was a pink nose that nudged open a door that would revolutionize my studio, and I can't think of a better vanguard. More mistakes await on the creative horizon as I tease out the secrets of this magic pairing, but mistakes are as necessary for progress as successes. Each hiccup reveals something new, offers a fresh take, or pinpoints the need for another approach. As long as we know how to put them to good use and remain open to their suggestions, mistakes actually tend to be more useful for growth—this escapade being a classic example.

So, yeah—things are going to get really interesting really fast around here. How fast? Just wait for the next post. Then in following posts I'll talk about some impromptu experiments I began, having been thoroughly swept away by this magic team of two. Forget your yellow brick roads, your silver linings, your pots of gold—my treasure is dirt.

"How will we ever know what we could do if we only do what we know we can do? Today's failure is tomorrow's starting point." —Beth Ferrier

Posted by SARAH MINKIEWICZ-BREUNIG at 4:53 PM